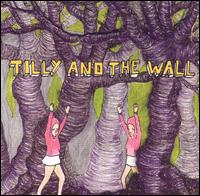 Tilly and the Wall

By all rights, I should hate this band: its members are uber-cute kids who look like they’re fresh off the set of a Gap commercial, the name of the band just sounds likes it's trying too hard, they have cover art that looks like it’s been provided by an artist with a $85 hair-cut trying to imitate Marcel Dzama. . . I mean, crap, they’re even on Conner Oberst’s label! More damning still should be the fact that they don’t even try to avoid the sugary sweet songs their title, cover art and association with Oberst imply.

But, here’s the problem: I can’t help really liking this album.

See, if the indie music class of 2004 all went to one big high school, bands like Animal Collective and Devendra Banhart would be the dirty pot smoking hippies everyone was afraid to sleep with, Xiu Xiu would be that kid alone in the cafeteria dressed in black and writing something furiously in his diary, Mclusky would be cutting class and stealing kids’ lunch money, the Yeah Yeah Yeahs would be Heathers, Les Savy Fav and Liars would be making decoupage modernist sculpture in art class, Walkmen and Fennesz would be doing their homework, Trail of Dead would be the hot guys who just kind of hung around and were really sweet to the girls but didn’t mean a word of it, the Fiery Furnaces would be bickering in the library and Franz Ferdinand would be working on Ivy League college applications. Anyway, while all this was going on, Tilly and the Wall would be the preppy kids who did their homework on time, were teachers' pets and went on trips together on the weekend in their church group and sang together in the back of the van on the way home.

Tilly and the Wall make pop songs that sound like they’re made by a high school church group on shrooms with a tap dancer for a drum kit. While it’s true they do use a tap dancer for percussion (yes, it’s worth typing twice), apparently Tilly and the Wall have graduated from high school. But they don’t let that stop them from acting like they’re still there. This is album all about high school, or more accurately, about finding furtive love in high school and holding hands and all that. But, maddeningly, instead of wanting to join forces with McLusky and give these kids a wedgie, I find myself captivated by their songwriting sense, and yes, those damn tap shoes.

From the first beat tapped out on “Fell Down the Stairs,” Tilly and the Wall have my attention. The entire band, three girls and two guys, seem like they’re singing on every song, passionately bleating out lovelorn epics that they have no right to have written. As bi-polar as most teenagers in love, sometimes the songs can seem very silly and sometimes they’re utterly heart wrenching.

Tilly makes pop in the sixties sense of the word with ascendant, sun-drenched melodies and sweet harmonies in abundance. In general, the songs that feature percussion are far more interesting and effective, like “A Perfect Fit” and “I Always Knew.” Alternately, “Bessa” and “Reckless” are prime examples of the odd sounding sing-a-long pop that teeters on the razor’s edge of being trite, but somehow maintains balance and throws in a few surprises.

“Nights of the Living Dead” would be one of those aforementioned surprises. Opening with the classic lines: “Well the high school kids are all fucked up/ touching each other oh my god,” a surprisingly sarcastic pseudo-punk-pop epic ensues. It recalls the energy and pure wackiness that made the Moldy Peaches interesting for about five seconds. Only if the Moldy Peaches were in 9th grade, Tilly are in at least 12th grade and have had their first beer. The song ends with the band chanting, “I wanna fuck it up, I wanna fuck it up,” but somehow, you know they’ll be the first ones to class on Monday morning and they’ll have their homework in on time. That’s just the kind of band Tilly is.

The other song that stands head-and-shoulders above the other ditties is “Let it Rain.” A jaw-dropping, sincere epic, it is one of my favorite songs of the year. Here, the band’s almost-harmonizing that doesn’t quite work in other spots is flat out heart-rending. The layered vocals that spin a tale of loss perfectly illustrate nostalgia for love that never quite started and actually make it seem like high school is a place I would want to go back to. It’s so effective, it will have you playing along with the rest of the album, even if you don’t want to.

Tilly and the Wall is a band that makes you realize, hey, those kids in high school wearing Gap clothes and hugging in the cafeteria weren’t necessarily total jerks. And, damn it, they have feelings, too.