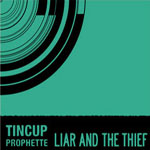 Liar and the Thief

Like Andrew Bird, Tin Cup Prophette -- Amanda Kapousouz and the occasional guest -- cycles violin lines in loops, singing and accompanying those loops with additional melodies. Unlike Andrew Bird, who is wry, playful, and sometimes intentionally glib, Kapousouz writes music that gapes with wounds, and pours out from its confines a simple and straightforward mantra of sonority and world-weary frankness. It's sometimes hard to envision such detailed cartography and such storied-sounding songs as the product of a single individual, let alone such maturity from someone this young.

With its “sail around the world” refrain, "80 Days" sounds as if it has abjured social niceties, and resigned itself to solemn exile on the winds of those building violins. It's so alarmingly stark and then suddenly so sweeping that it readily conjures desolate oceans and isolation under gathering clouds; what is missing in terms of a more conventional song's bottom end (drums, bass) is supplanted by spaces and attention to that central violin's tonal consistency. Opener "Speak Up or Spill Down" weeps with like-minded sentiment; the sadness Kapousouz employs doesn't resort to gasping or flailing, but resolute and stoic restraint. This is some pre-shotgun Hemingway stuff we're hearing.

Tin Cup Prophette occasionally slips into another woman's voice, like on the predictable "Until the Dust" -- during which Kapousouz sways along to an unnecessary keyboard line and thin drums -- and, to a lesser extent, "Going Numb," with its pizzicato personality vaguely reminiscent of Regina Spektor. These are self-encapsulated (and brief) instances of hope, a deviation from the rest of the album's strangely appealing bleakness. Taken completely out of context and on their own they are nice songs, but on Liar and the Thief as a whole they are apparitions -- beacons which flicker and then disappear in the grey of the album's lonely, sad beauty.

The album benefits the most from its looping technique in its closing, and best, track: the album's could-be statement of purpose "All Is Lost." A partnership of guitar and violin reestablish and perfect Liar and the Thief's characteristic layering as Kapousouz sings of both "laying to rest" and, soberly, "open eyes." With a culmination of maturity and directness taking place, "All is Lost" is the best of what Liar and the Thief, a concise and impressive debut, has to offer.