1. Fear and Loathing in Mahwah, NJ
2. My Time Outside the Womb
3. Joset of Nazareth’s Blues
4. Arms Against Atrophy
5. Upon Viewing Brueghel’s “Landscape With the Fall of Icarus”
6. Titus Andronicus
7. No Future Part One
8. No Future Part Two
9. Albert Camus 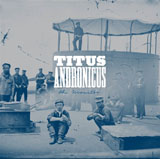 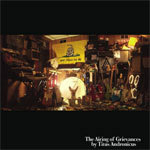 The Airing of Grievances

The Airing of Grievances is the kind of record that could kill your speakers if your speakers had a soul. They don’t, of course, but an especially doting pair of speakers could end up rearing something beautiful. When Titus Andronicus is playing on any speakers, the speakers are simply dead, blaring nothingness but calling it spirit, or, at least, if Titus Andronicus isn’t pretending it’s spirit, then what’s the point? The band is after all from New Jersey, and their affinity for the Boss should allow their whoring, wailing din to play out as an everyman flag of anthems, juxtaposed against the most Bright-Eyesy Bright-Eyesishness this side of, well, Conor Oberst. All of which is a pretty neat idea, really, because the Boss used to have an energy bent almost solely on a powerful, boyish angst and Conor Oberst can’t seem to shake that. But somewhere between bar show and full-length the idea was abortioned, the tension exploited and mistranslated as a fleeting, grating hatefuck. Din on din. One flailing, one grinding. This is like settling for angry, ugly amateur porn because you either don’t have much time or want to punish yourself. 2girls1cup Cliff’s Notes: the seeds of soullessness.

It’s antagonistic; I’m antagonized. In the hollowed roar of each track I’m sometimes surprised, returning to new discoveries: the Walkmen suddenly feet-first through “Arms Against Atrophy,” turning the turd-brown a zealous blue despite the Midwestern engineering frat toms; the harmonica that actually succeeds in slowing “Joset of Nazareth’s Blues” to a pretty enough march; the tumult of drum rolls and excruciatingly mixed vocals finally wielding a bit of self-control as “Albert Camus” finds its expected molehill. But even then they up and just read the end of The Stranger, singer Patrick Stickles all obnoxious deadpan as feedback swirls around his undergrad English degree. In total—and there is absolutely no other way to absorb this album; if it lets up it will lose itself—the sentiment is hostile, championing a mismatched, bitchy pile of allusions to alienation, dissatisfaction, and indifference that begs for attention and respect but is too passive to amount to anything but a wan wash.

It’s an affront, I get it. My sensibilities have been kinda stirred. I get that the record’s supposed to blaze and then go away, but if they’d gotten on my case with speed or steel or anything but this blaring, pumous-y indie rock record, then maybe I’d feel something besides a calmed, nostalgic catatonia. And if I indulged—I mean truly broke the backs of the audience—then I’d find the desperate butt of a bitter review and plop a scenario there, one where I was visited by the corpse of William Shakespeare. He’d be more than a skeleton, zombified with purple flesh hanging from his still-coiffed ghoul’s hair, mostly because Shakespeare has never completely died for me, not in any romantic way, but because I still try to care about him and still don’t. I’d have the wobbly old poet emerge from the mouth of my cat or from my roommate’s ass, perhaps quote something Martin Luther said about Satan’s butthole, and then Shakespeare’s corpse would speak in iambic pentameter, which I’d spend two hours researching on Wikipedia, which I’d intertextually refer to as the “interweb.” It would be my approximation of iambic pentameter because even after two hours of research I’d still forget whether I’m supposed to start on the stressed or unstressed syllable, and that would dictate how I’d have Shakespeare sermonize about the Pogues. Titus Andronicus Review Dom would argue with Shakespeare’s corpse about the merits of a super-violent display of Victorian dehumanizing, call his visitor “Shakes,” assert the empty, empty wall of sound recorded annoyingly that he was Reviewing, and then refer to feces again. And then for the magnanimous finale, Shakespeare’s corpse would remind Review Dom of that part in “Upon Viewing Brueghel’s ‘Landscape With the Fall of Icarus’” that they could both agree totally ruled even if they can’t remember what exactly happened, and Shakespeare’s corpse, now the glowing symbol of Review Dom’s divisive, embittered soul, would ascend toward the ceiling of the small apartment, one toe still in the kitty’s mouth, pulsing brighter and brighter until he becomes engulfed in a swelling, glorious song of flame. The room is torched and Review Dom is screaming. I pause, direct the reader down, past the wet, sizzling wallpaper, over an exploded bag of potato chips, toward the smoking table where an iPod is melting. On that iPod is Airing of Grievances, played exactly thirteen times.