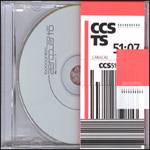 2005 started about as shitty as humanly possible for your intrepid reviewer; within 48 hours of returning to work after the holiday last year I heard that two of my favorite bands of the decade had disbanded. The demise of Mclusky and the Unicorns was a shocking blow to my outlook on the indie music world and I spent much of 2005 looking high and low for bands to replace my two titans. Results were mixed. I think the best thing I learned was to cast my net wider, keep my ears open for recommendations and try stuff I wouldn’t necessarily go for. Following one such recommendation led me to check out a Venezuelan band on the very last day of 2005. A few weeks ago if you’d asked me about the Venezuelan music scene I would have looked at you like you were nuts. Now, ask me the same question and my face will light up and I’ll ask excitedly, “Have you heard that Todosantos album?”

Unfortunately, no one has been asking me that particular question, but that hasn’t stopped me from pushing this album on pretty much anyone and everyone I know. Because this band, this wonderfully rocking glitch band from Caracas, Venezuela, has been pretty much all I’ve listened to in the past few weeks. I’ve shamefully left a big pile of holiday gift CDs painfully underplayed as I inject the seering, humming rock narcotic of “A Veces” (we've got it for download to your upper left, give it a shot) a few more times.

Todosantos display a heady dexterity with the sounds of electro-pop, glitch and even some post-punk, employing them to create tracks that are either wonderfully evocative and pulsing glitch tracks or soaring anthems that ride the fence between electronica and indie rock. Fair warning: songs like “A Veces” and “Año Nuevo” are utterly addictive. There’s a definite nod to New Order in the electrically crackling feel that suffuses the album, but the knifing riff, yelped lyrics and post-punk beat of “Ian Curtis” show that Todosantos is fans of Hook and Sumner’s earlier outfit as well.

But at other moments, as on the warm, lulling “Estupido,” they excel at a lushly layered form of glitch pop so expertly mixed with the live music that it belies its home studio invention. This side of the band demonstrates a deep affinity with the work of artists like the Notwist, the Books and Four Tet. These intricate songs are anthemic in their own way and sort of endlessly listenable and have been aided by some of Venezuela’s best lap-top artists. “Diciembre” features a light guitar riff that is soon joined by pulsing, mellow electronica as the song becomes a lazy epic. Somehow a sample from Panda Bear’s Young Prayer works it’s way into one of the songs and manages to seem perfectly at home.

The contrast in styles can make it a little hard to pin down the band, but in that way the album feels oddly similar to Broken Social Scene’s eclectic You Forgot It In People. The album’s seemingly disparate parts have been mixed and slaved over with the love and devotion of someone trying to make a perfect mixtape for a friend. And Todosantos seems to excel whether they’re dropping druggy, looping beats, glitchy ones or more raw punk stuff. And this is because in similar fashion to BSS, despite all of Todosantos’ bells and whistles, on most songs the band’s versatile guitarists drive the sound, whether it’s on the anthemic, glorious “Año Nuevo” or the mellow “Provencia” or the glitch-laden, driving opener “1999.”

After a year rife with bands making seeming one off albums that purposely went away from their strengths and not too many new bands entering the fray, Todosantos’ Aeropuerto is a breath of fresh air. They are a relentlessly creative and intriguing band, one well worth watching and rooting for, even from halfway across the globe.