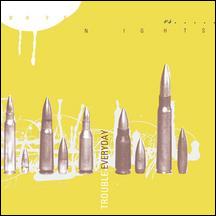 In the midst of the dance-punk hype tsunami, something odd happened: the music itself disappeared. The genre that was for all intents and purposes re-started by the Liars, Les Savy Fav and the Faint in the late ‘90s and early ‘00s seemed to die out with it’s very progenitors, despite the rabid claims of people clinging to the Rapture’s stale Echoes (2003). With the Liars camping in the woods making the soundtrack to Blair Witch 3, Les Savy Fav looking a little too old to be shaking their booties and the Faint staying quiet, it seemed the stars that powered the dance-punk revival were all but extinguished.

Nowadays, shallow bands like the Rapture, !!! and Outhud don’t really have the chops to inherit the dubious throne. Franz Ferdinand made a bit of splash by being cute and pilfering the sounds of the dance-punks, but they come off as a happier Interpol who don’t take themselves or their songs too seriously. Does dance-punk have anyone left to be the standard-bearer, or will it go the way of the WMD?

Enter Trouble Everyday (the band, not the ridiculously gory vampire movie by Claire Denis). A band that fits into the widely accepted dance-punk definition (i.e. angular guitar riffs, danceable thick bass lines and rapid fire drums), they’ve left the high-falutin’ concepts to their older, crankier brothers the Liars and decided to focus on seriously rocking. Nowhere near as harsh as the Liars sounds of new and old, Trouble Everyday sounds more like early Les Savy Fav’s catchier moments or a young Wire trying to make it big or like a band that really liked Interpol’s “Obstacle 1” and “PDA.” I’m also reminded of Fugazi’s Red Medicine (1995), although where that album crankily ruminates about punk’s place in a corporate environment, TE’s album soars and pushes and doesn’t really turn on Headline News enough to give a shit.

Hopefully, we can now put all talk about influences to bed. Because the difference between Trouble Everyday and their influences is that, while the latter likes to experiment to dubious ends, the former is more than content to create catchy, head-bobbing post-punk gems (without pandering to the dreaded lowest common denominator). As simple as that sounds, there really aren’t that many bands doing that right now, and there are even fewer who can construct songs with the angular dynamics and drum and bass theatrics that Trouble Everyday features in spades.

Starting with “Camden," Days vs. Nights is an album chock bloody full of anthems featuring vocals and guitars that work off each other call-and-response style alongside pulsing bass and rapid fire drums. “Kids” kicks off with lead singer Kyle Costill intoning, “How many miles can you drive with your eyes closed?/ How many times can you meet their demands?” Pretty much every lyric of every song sounds like a chorus that you can’t help but sing along to.

“Days vs. Nights” features a filthy rapid-fire bass-line and yet another fist-pumping, ass-shaking beat. “Even” channels some forgotten Pavement song during its refrain, then thickens up the atmosphere with rampant screaming guitar abuse during the verse. I don’t usually count off so many tracks in order, but, damn they flow together so well, each seems to kick the one that preceded it right in the teeth.

Picture a high-school style battle of the bands tournament featuring legends of dance-punk past and present. It’s single elimination, winner take all. Trouble Everyday would waltz out and play the gorgeous but fierce “What’s Wrong” and easily bitch-slap any comers from the present. The Rapture and !!! walk home, teeth kicked in. When Wire, Gang of Four and Fugazi stepped up to the plate, batting for Legends of Dance-Punk Past, Trouble Everyday would be in a spot of trouble, but hey, that’s pretty good company to get your ass kicked by.