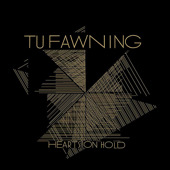 Like a rich bouillon siphoned from the best parts of their former touring bodies, Tu Fawning is what happens when a bubbling local music scene checks and rechecks its own temperature. Built from popular Portland groups and touring names currently and functionally on hiatus—lead guitarist/songwriter Joel Haege (of the sometimes intolerable 31Knots) and other-half Corrina Repp (of Corrina Repp, of Mark Kozelek’s Caldo Verde label)—the band’s debut LP, the sap-addled Hearts on Hold, feels more natural, and infinitely more sincere, than anything the two artists could have ever accomplished individually. This is bread and butter nymph-pop, warm and gluttoned with starch: the Pacific Northwest painted in the homiest of colors—burnt, autumnal, aged. If “hoary” was a color, Tu Fawning’s stock would glint with greasy that.

But all that betrays just how creepy Hearts on Hold can get—sometimes more in debt to Michael Gira than Akron/Family, if we’re talking musicians dabbling in both the deciduous and the doomsaying. The trumpet that opens “Multiply a House,” nasally as if piped through a ram’s horn, as if gripped by a reanimated skeleton, instantly declares something bleak, something with portent in its marrow, and something possessed by ghosts: abandon all hope, ye who enter here. Or maybe something not so melodramatic; when Repp begins stretching her presence to “ooh-ing” shadows, split by slinking, martial drums, we sense a hint of levity in how untouched she sounds. By the time “Mouths of Young” nestles into a furry stripe of synth and Repp lounges alongside, kindred spirit of Victoria Legrand, the album doesn’t seem such a bloodless, macabre groan anymore.

Hearts on Hold, in fact, turns out to be something of a rollicking, if heavy, stab at chamber melody stuck into the gears of a psychedelic knack for jamming and “tribal” drums—hot jazz or funk peek through rust spots. “Sad Story” is part garage, part Daptone, a furiously unfurling core of some repressed quotidian pounding on the cellar door; “Just Too Much” mimics a Christmas carol, traditional and frostbitten, but the penultimate noise soundtracking a sleigh tumbling into a whitewashed canyon upon an unforgiving Winter ride. “Apple and Oranges,” which can’t help but be the album’s beautiful centerpiece, tries its hand at, well, everything: plaintive string suite; full-throated harmonies; menacing tension broke by an accordion, or by someone sighing, or by a simple brushed snare. It’s a gracious song played gracefully, a kind of song played kindly.

Which is to say, Tu Fawning is a contemporary supergroup for the Portland scene to embrace. Cobbled and stitched but organic, seasonal, and dead-eyed serious, the band defines “saturated” in a way a whole slew of Portland artists have long ignored in an otherwise saturated scene: not through glut or grandiosity, but through embracing the bones of every strand of sound to ever toe Portland’s shores. I’ve had little chance while I’ve been in this city to watch a band so imbue the “soul” of a scene; Tu Fawning eats it whole.

Look only to “Hand Grenade” to witness the suffocating vortex of grunge plugged with trembling post-rock, to hear folk and punk and the eviscerating sense of loss of folk and punk and grunge and post-rock roaring together, purple and plasma-thick, over one girl and one boy and the relatively small band they chipped in on, chipped from the shoulders of giants. “Hand Grenade,” as well as all of Hearts on Hold, just plain sounds like Fall, and then sounds like Winter, and then could someday sound like Spring. It’s a cycle of music struggling to look forward as it’s pawed at by spectral hints of the past, the story of a few important bands gone to garbled word-of-mouth; the literal translation of decades of nostalgia. No wonder the lyrics so often retell vague, asymmetric relationships as if summoning them via séance: distance goes a long way in describing this band, occupied as they are in sounding so goddamned haunted.

But now with Haege recruited to Menomena and the band—which also houses Toussaint Perrault and Liza Reitz, similarly minded Portland ilk, active and known—growing ties to Polyvinyl, touring with folks like the aforementioned Menomena and Kozelek, as well as Norfolk and Western, seeing the country and learning its spread, Tu Fawning may be able to finally shrug off the burden of its region’s sound. Or just sound not so burdened. Cue kazoo.