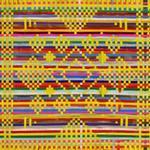 The most astute description I’ve read yet of Tussle’s third album in four years is “unfussy.” Strange, since I thought being fussy was precisely what distinguished them from their Krautrock peers; Kling Klang (2004) and, more specifically, Telescope Mind (2006) found their junkyard approach to percussion primary justification for setting them ever-so-slightly apart. After all, Tussle’s name has always seemed entirely appropriate: the spaces they carved out for dancing seemed vaguely antagonistic, marked by intentional difficulty and the sudden alienations of dropped beats and writerly departures.

Previous albums found Tussle goose-stepping without much conviction from strictly improvisational codas to more cohesively dub, post-punk, and dance-punk grounds. But they seem to have found niche comforts in at least one of the genres’ commonalities by placing stress on rhythm and momentum. These songs shudder to stops, surprise with new directions, and test tensions like metal suspensions straining against winds. Cream Cuts may endear itself less to post-structural ears, but doesn’t quite throw out the baby of their grubby tread with the bathwater of their genre-hopping.

“Rainbow Claw” is a ready example of Tussle’s newfound and invigorating emphasis on stop-start methodology, even behind a bass line (courtesy of newcomer Tomo Yasuda) so cyclical it sounds like it came right out of DFA’s remix playbook. Its chorus clinks and pauses with efficient, industrial stomp, piston-like and unrelenting. Similarly, “Night of the Hunter” dirties up recognizable beats while pushing them inexorably forward, the effect of which is that “Hunter” is neither boringly perfect nor fleetingly self-indulgent. “Hunter” also makes sense of “Titan,” Tussle’s most self-consciously dance-oriented song ever, and a team-up with guest collaborator Hot Chip’s Alexis Taylor.

If Tussle were in fact hoping to boot their sound into strictly dancier rooms, they’ll have to contend with some whole new sets of criteria. Cream Cuts inevitably stops well short of anything quite so panoramic as more electronic dance acts like Pantha du Prince, Ellen Allien, or even Lindstrøm’s newly minted soundtrack to The Never Ending Story. The interludes here are borderline wasteful, almost seem like intentional postponement given the short track listing and Tussle’s newly unsheathed stylistic narrowness; they’re also no Sweep the Leg Johnny-style monstrosity to contend with, tail-chasing in back alleys with a glass-and-glue sound. Nonetheless, Tussle retain some vestiges that might sound at home in Dischord’s early 2000s catalogue, and pull them, kicking and screaming, to the party of more accommodating modes.

Tussle have sharpened their edges, sawed excess fats and driftwood from their bloated frame, and end up sluicing waters— at least some of the time. It’s the most cohesive decision they’ve made yet, but one wonders what Cream Cuts would have sounded like had it been unbound rather than streamlined; let loose in a single direction rather than pinned and caged. There’s something still rumbling there, under the surface.