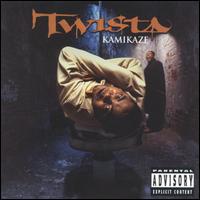 Tweet
Okay, so you've checked the rating. "Maybe's he's just being a pretentious fuck," you're thinking. Perhaps you're right(I certainly wouldn't put it past me), but there are a few things I tend to demand in music. I don't require poetry, though I'd certainly take a Silver Jews album over anything on the radio. Hell, great songwriting isn't even a prerequisite for enjoyment, just some level of proficiency and tastefulness. The Walkmen's "The Rat" seems to have about 3 lines, but it combines driving instrumentation and wailed emotion to an effect far greater than anything off the last Death Cab album.

Where I tend to stop listening is, "looka how she makes one butt cheek freeze/looka how she make the other cheek move fast/looka how she switch, make the other cheek move." Oh yeah. Now while I won't argue that this ass-shaking is an impressive ability, this serves as just one of many such moronic lines that litter Kamikaze, the forth album from Chicago speed-rapper Twista. Perhaps the best part, that particular gem is drawn from a song titled "Badunkadunk."

"Okay, so he's just an indie rock snob. What the fuck does he know about hip hop culture?" Sure I'm an indie snob, but just cause an album has three songs about the joys of the female ass doesn't make it representative of hip hop culture and doesn't mean it isn't a pointless album. And no, the song about rims doesn't save it. There have been some great rap albums that don't deal with much more than this, but at least manage to present the material well, either through the rappers or producers. There have certainly been plenty of godawful records that fail mostly because their enlightened social message overwhelms delivery. Truth is, Kamikaze neither tries to transcend the material nor manages to present traditional ideas in anything approaching an original manner.

This is not to say Twista doesn't have skills. Looking through the CMG official rating guidelines to figure out where exactly Kamikaze fits, the phrase "a faint good idea with a lot of useless crap," seemed especially appropriate. Twista, as witnessed by the radio-played-like-a-dead-horse-being-flogged "Slow Jamz," knows what he's doing when it comes to speed rapping. He may have been outshined by Kanye West's one-liners and production, but he served the only purpose he should be allowed to serve on records -- the guest on the single.

I find it surprising he's even made to a 4th album because he simply can't support the album format. After a few tracks the basic idea is clear: Twista raps his ass off in either a non-sensical or repetitive style over a beat that sounds like it was taken off any rap album made in LA circa 1992. Kanye produces two tracks on the album beyond "Slow Jamz," "One Last Time" and "Overnight Celebrity" (and yeah, the chipmunks come hard on the latter too). While his production certainly exceeds that of Toxic, who was behind most of the rest of the album, it still isn't particularly interesting.

The album starts out 808 blaring with a pair of ridiculous tracks, making it clear on "Kill us All" that the basic idea here is that Twista will, "murder me to murder you." Once you get past "Overnight Celebrity" you've basically heard the entire album-violence and misogyny tempered with a dose of the sensitive thug (a really unfortunate act pulled out on the saccharine, clichéd "Hope" as well). You'd miss the guests I suppose, and it's good to hear R. Kelly singing about women's asses, but most of the performances are dull at best.

Twista should really be trying to maintain a career on the basis of his ability to make a great guest appearance. If the rise of legal file sharing continues and the supposed death of the album format is actually in progress (good lord I hope not), Twista will be a lucky man. In the single format he comes off as impressive and skilled, but once you get 65 minutes of him he loses almost all of his appeal.