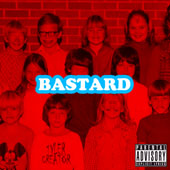 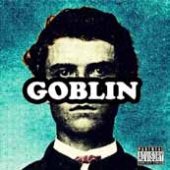 Because I resent that reviewing Goblin feels like an obligation rather than an opportunity to weigh in on something that, for fifteen minutes, is almost inexplicably Important; because I realize you’re probably tired of hearing this shit; because no matter what I write about this record some forum-dwelling mopes are going to complain about it later; because Tyler has never been and will never be on the receiving end of the jokes he’s already made a career on; because the aggressive mob mentality of Odd Future’s core fanbase feels oppressive to me in a way that’s scarily reminiscent of Insane Clown Posse; because even though Goblin‘s hype-silencing badness should be all but self-evident it will still be held aloft as the definitive document of vindication Tyler’s fans need it to be; because, to paraphrase Mark Abraham, Tyler could have just posted a web poll asking if people would like to be a fan of something controversial instead of releasing an album that essentially does nothing but ask the same; because even though at this point we’re all so acutely attuned to the machinations of an accelerated hype-cycle that we should be able to sort of just collectively agree to quash it before it overwhelms whatever little thing incited all that excitement in the first place, it still fucking happens, and is happening right now with Goblin, and with this, just one of way too many reviews of it; because of all this and so much more: fuck this album.

And I’d just like to point out right now, as something of a disclaimer, that I am without a doubt the closest thing the Cokemachineglow staff has to an Odd Future fan. Which is to say that I get it, generally, as a concept. I’m on board with the idea that a bunch of precociously talented teenagers falling into popularity and acclaim after releasing a handful of homemade but professional-sounding hip hop mixtapes and albums is an exciting thing. I liked that Frank Ocean album. I really liked that Mellowhype album. And even though Clay Purdom’s dismissal of Hodgy Beats and Tyler’s now-infamous Fallon performance is well known (and well-contested) around these parts, I confess to having felt a genuine rush when watching them get up there and let loose the first time—not because it was boundary-pushing or shocking in any way, but because the vitality they exuded felt palpable, their manic energy as infectious as it was unexpected. This was a group best known for, and most widely discussed in the context of, graphically detailed jokes about rape and murder and a zillion other descriptions of acts of depravity, and yet here they were, blowing the roof off their live television debut, and the most exciting thing about it wasn’t any id-tapping pathos and/or shock-tactics, but just the straight-up fun they were having. It felt communal, inclusive, and (yes) worthy of hype. It felt, in short, like exactly the opposite of Goblin.

Not that Bastard (2010) was much fun, either—it, too, aspired to be a rap-vérité document of the dark recesses of a troubled mind, deliberately shirking the fun side of the Odd Future shtick in order to tap into something, y’know, “deeper.” Goblin follows more or less the same path, aspiring to some vague notion of substance but never quite getting there, and in so far as it toes that line stubbornly it at least successfully sells a sense of its own cohesiveness. It’s almost tempting to call Goblin Tyler’s “artistic statement,” but you can only make a statement if you’ve got something to say. Unfortunately, Tyler does not.

What Tyler fills Goblin‘s absurdly overlong running time rapping about is pretty much what we’ve come to expect from him—kill people, burn shit, fuck school, coolly perpetuate contempt for marginalized Others, etc.—with some weirdly Drake-like self-consciousness about his sudden fame and fortune thrown in for good measure. We know after hearing “Yonkers” played to death that Tyler is a walking paradox/no he’s not, or whatever, and the rest of Goblin finds him belaboring, though never elaborating on, exactly that idea: everything about his records speaks to Tyler’s frustratingly non-committal attitude about everything he says and does, his persistent refusal to actually stand for something. He’s gotten a lot of mileage of that tendency, mind you, but in constant focus across Goblin it simply betrays his adolescence and, frankly, his ignorance—his ignorance of what it means to be legitimately controversial, or shocking, or defiant.

There’s nothing remotely radical about doubling back on everything you say and do; there’s nothing cool about feigning indifference at the first sign of dissent or retort. Tyler has no problem making reprehensible comments, but if you attempt to engage with what he’s doing on any level, well, he’s got you there: you’re just taking him too seriously. And if you try to dismiss it as trashy or juvenile? Well, he’s thought of that, too: he’s making music of substance because he’s working through deep psychological issues of his own. Goblin revels in this back and forth, whether by adding extremely lame “disclaimers” that attempt to cancel out the “shocking” content of the music they precede or by acknowledging potential criticisms with his “psychologist” alter-ego only to laugh them off as jokes, and the net result is an album which attempts to be both serious art and nothing worth getting serious about. And it tries really, really hard to look like it doesn’t care.

Which isn’t to say that the album lacks even brief highlights—Tyler is proficient enough, and the album is sure as hell long enough, for him to stumble upon a few solid ideas along the way—but the deepest problems pervading Goblin in its entirety simply overwhelm them. However basically enjoyable I find the bounce of “Analog” or the Frank Ocean hook of “She,” the enjoyment just isn’t worth slogging through the rest of the record to find. And it’s such a slog; even within a genre notorious for overstuffed and atrociously paced records, Goblin feels like a endurance test to get through, not least because of the dark, gloomy swaths of synth Tyler tends to lean on as production choices. Served as discrete little chunks, the production across Goblin is actually fairly strong, but over the course of an hour its initial charm wears mighty thin.

It’s actually kind of astounding that Tyler thought it reasonable to begin his album with what is quite possibly the goofiest, least shocking, and/or “relevant” line record-wide, the limp assertion, “I’m not a fucking role model,” which as a general bad-boy sentiment feels like a holdover from the early ’90s. Joel Elliott says that the supremely corny “random disclaimer,” which kicks off the unbearable seven-minute slog of “Radicals,” reminds him of the warning title cards they used to stick at the beginning of pre-Hays code films, for all the relevance it lends his shock-tactics, and that’s a problem that speaks, again, to Tyler’s persistently non-committal attitude about everything. His constant assurances across Goblin that he doesn’t really mean any of the hateful shit that he continues to say, including this disclaimer’s attempt to dissuade listeners from actually doing anything Tyler raps about and the title track’s assertion that because Goblin is a work of “fiction” Tyler himself shouldn’t be blamed for anything bad that results, undermines any of the resonance Goblin might have otherwise had as a, well, purer document of depravity and, at his most extreme, a certain kind of madness. But Tyler wants it both ways—he wants the glamour of controversy but none of the potential responsibility that goes along with it.