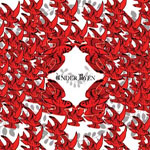 In 2003, David Fricke, the head of Rolling Stone’s genre-wide blanket statement department and hater of gold-plated cell phones, dropped a quote so broad in its praise there’s really no way to blame Under Byen for including it everywhere information about the band can be read: “The best band in Denmark, probably the best band in the world.” We’ll ignore for the moment that this kind of NME brain aneurysm practically insists on listener backlash, nullifying the immediate benefit of drawing attention to the band. The more interesting notion is that a band this weighty, whose album’s hour span is a long, dense hour, can accumulate the kind of hype generally reserved for bands who burst from the gate on the strength of a two minute wonder with the shelf life of produce. Samme Stof Som Stof (Same Fabric as Fabric) seems to resist the urge to engender access, an album to which applying the term “glacial” doesn’t mean calling it “slow-core” and still isn’t entirely meaningless; the album has the weight of ages behind it, a complex personality and everywhere its implacable, stubborn patience.

With its plodding, one-dimensional down strokes, “Pilot” is a misleading opener, like an attic without a window through which to see the vastness outside. Placing the song anywhere else would have impoverished it by contrast, but even with the undivided attention of the opening slot the seven-plus minutes of follow up “Den Her Sang Handler Om At Få Det Bedste Ud Af Det” wash it away fully and without memory. Vocalist Henriette Sennenvaldt tremors and flits appropriately, a ghost’s voice, even as the song moves gradually and purposefully from understated keyboards and various percussive voices to its final movement, a crescendo of ascending violins and a haunted piano’s goodbye. Her often Björkian performances are knowing, intuitive partners to the band’s incessant building, and they swash color with each of the songs rather than against or over them.

Under Byen excel at rendering the impression of size and space and handling the way the two complement each other. Counterbalancing the mountainous “Den Her Sang Handler Om At Få Det Bedste Ud Af Det” and “Af Samme Stof Som Stof’s” handclaps are “Heftig,” or the blink-and-you’ll-miss-it “Panterplanker.” “Af Samme Stof Som Stof” is the closest Samme Stof Som Stof comes to single territory, and even it is best described as a willing victim to its own inertia, fading slowly into strains of thin sound. “Film Og Omvendt” and “Liste Over Sande Venner Og Forbilleder” thus become the album’s most calculated diversions for their immediate proto-goth leanings, and taken by themselves or plopped into a foreign mix, they might embarrass to a Reznorian extent. But on this breathy, windswept record, they are temporary, eccentric cracks in the album’s monolithic exterior, and somehow exciting. That “Palads” introduces a modicum of funk and sway at album’s end is not surprising. By that point in the album we’re meant to understand that if the journey were a quick one it wouldn’t be worth taking.

Samme Stof Som Stof is Torontonian label Paper Bag Records’ first international release, and it’s a respectable choice if not an easily marketable one. The album is one to which appreciation comes slowly and in immeasurably small steps. The situations where listening to it seems appropriate may be few and far between, but the album is like an artifact, and giving it the right context and setting increases its spaces. While they may not be the best band in the world, or even the best band in Denmark, Under Byen are writing counter to the pace and temper of our time. Samme Stof Som Stof is an album on its own terms.