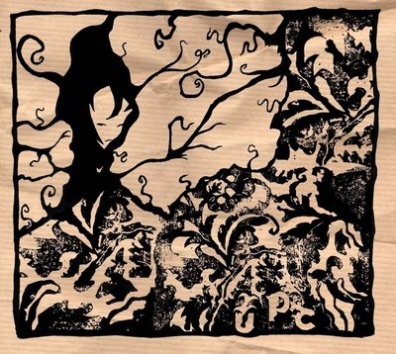 Wednesday night is post-rock night, so where better to begin than in the twinkling grease of the River Medway with local ambassadors of irony Upcdowncleftcrightabc+start: four Kent heralds who’ve been slaving for years now on the UK instrumental circuit. “And that makes them original, does it?” says you, smirking like a good’un. An act worth catching with that mess of consonants for a name? Well I’m as prone to un-reversible value judgments as the next man, and with a handle like that, I too have to confess that I thought this lot couldn’t be any more post-modern than just some healthy kitsch. However, it turns out that Upcdownc fly slightly higher than the bustling approach corridors of today’s polite metal, and—coming from the town that introduced the world to Charles Dickens and neon downlighting—have apparently been merrily polarising opinion on the Round Table of post-rock for time. Are they black nail varnish or philosophers in Converse? Kick-ass or dick-less? And which way’s the weathercock spinning today? Either way, the country foursome continue to kick up a storm on Embers: the belated sequel to And The Battle Is Won (2005) and a record with at least one track for everyone. Everyone likes guitars, though, don’t they? Just checking.

Surfing constantly between seminal and swarthy, Upcdownc’s sophomore finds them making deeper inroads through the scrubland of space-rock, revealing a band who’ve obviously practised in both garages and galleries alike. I’ve been out of the loop for a while now, seeing little point in continuing with generic modal jamming since the majesty of The Earth Is Not A Cold Dead Place by Explosions In The Sky (which came just when I was ready to turn off the heating and snuggle into my box, i.e. 2003). It’s good to get back to the point of departure, which is precisely what happened when I spun “Get To The Chopper,” the first track proper in this helping of ten. When a band named after a Sonic the Hedgehog cheat write a song that references Predator you know you’re on your way to scaling the zenith of repressed masculine glee, and that’s precisely what you get here: slow Placebo sirens that beef up into sawtooth fury, angry like rose-tinted Mogwai and with more balls than a Van Damme showdown.

The whole thing is a Guitar Hero cash-in just waiting to happen, and that’s pretty much the access for all fifty-eight minutes of the record—post-rock in donkey jackets. The patter of marching paratroop boots sounds over the entrance to “Cascades” where delicate electrics cause a library chorus to go nuclear, the beat turned brittle and wintry. It should be noted that, until recently, Upcdownc sported not one but two drummers, driving home the message that shrinking violets should turn and hot-foot it to safety. Reduced to the more conventional one on Embers, the music has a flinty desperation that helps sell the video buccaneer/gearbox-full-of-tuning-forks angle they’ve been aiming for. On “Our Flowers,” happy strings and tumbling percussion fly like water from a soaked spaniel, charging faster and faster onward till it breaks the land-speed record; closer “The Creeping Fear” goes from Nick Cave beginnings to the rattle of holy artillery. Mercury-filled, soft-nose, depleted uranium, and dum-dum: there’s one of each kind in the mag, and you’d have to be layered in meteor-proof Kevlar to not succumb to a bit of the blast.

With its doom and philanthropy going pugilistic like Rocky and a chump from the eighties, Embers is a tightly-scored hour of rock catharsis, one you can indulge in without drowning in excess pretension. Frosted piano riffs and pellets of Celtic feedback crop up from time to time, reminding you the band have had music lessons, but if MacGyver can survive off the land with nothing but wisdom and his Swiss Army knife, what’s stopping four chimers with axes? While Embers does little to scotch the consensus that post-rock is the preserve of the goateed, it also spins a rugged and riveting yarn, feeding you on cookie-cut hyperbole that fills up more than just your base drives. It’s worth sticking with, and it’s inspiring to see that young men still care enough about teen trauma to work on a palatable antidote.