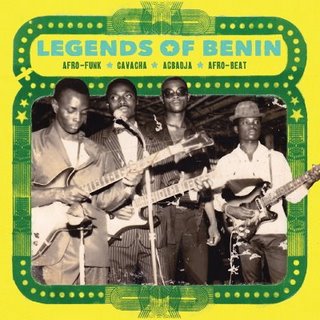 Over the past year, Samy Ben Redjeb’s Analog Africa label has released three excellent compilations of irresistible hits of the ’70s by musicians from the small African nations of Togo and Benin: African Scream Contest, a collection of innovative, genre-bending dance tunes; The Vodoun Effect, a sampling obscure recordings by the renowned voodoo-funk band Orchestre Poly-Rythmo de Cotonou; and now, Legends Of Benin, which compiles Cavacha, Agbadja, and Afro-beat hits by four “golden age” era composers—Antoine Dougbé, Honoré Avolonto, Gnonnas Pedro, and El Rego. It’s difficult to say which compilation is best, but of all three Legends Of Benin features some of the deepest grooves.

Like the other two releases, Legends Of Benin is a pretty package, with extensive, forty-page liner notes detailing composer bios and the story behind the project. Back in 2005, Redjeb was hoping to create a similar series for Zimbabwean Chimurenga music, but he was forced to leave Zimbabwe in the midst of a terrible political crackdown; eventually, Benin caught his eye when he noticed in some records a curious divergence from a vinyl pressing technique common to West African highlife LPs from the ’70s. It would have been interesting to hear some of the more obscure songs from that era that were written in support of the guerrillas who fought in Zimbabwe’s liberation war, but Redjeb certainly wasn’t settling for less when he decided to plumb a treasure trove of rare records to produce these current releases. Legends Of Benin in particular offers a sampling of hits by artists who have been virtually unheard of outside Africa for far too long.

The skilled musicians on Legends Of Benin play incredibly diverse music with feeling, but while some of these fourteen tracks are downright sweltering, others are cool and even somewhat haunting. The propulsive bass line and warm accordion refrain of El Rego et Ses Commandos’ “Feeling You Got” has the gruff R&B feel of Captain Beefheart circa Safe as Milk (1967). Antoine Dougbé’s “Honton Soukpo Gnon,” which hinges on a lilting guitar-and-organ hook, evokes mid-tempo reggae. On the other hand, the horn-accented crescendo groove of Dougbé’s “Honton Soukpo Gnon,” driven by the Cavacha rhythm popularized in the Congo (similar to a reggaeton beat), resembles the soukous style of classic Congolese bands like Franco & le TPOK Jazz and Zaiko Langa Langa. Funky Afro-beat shows up in the jittery drums, lithe guitars and driving horns of Honoré Avolonto’s “Na Mi Do Gbé Hué Nu,” as well as in the intermingling guitar lines and cosmic synthesizer solo of Honoré Avolonto & Orchestre Poly-Rythmo’s “Tin Lin Non.” Latin influences show through in the cool vocals and laid-back guitar of Gnonnas Pedro & his Dadjes Band’s “La Musica En Vérité.” The average yovo wouldn’t hear it, but this famous salsero is perhaps more commonly known for incorporating the traditional Agbadja rhythm into popular tunes like “Dadje Von O Von Non.”

The main reason it takes over thirty years for many talented artists from Africa to gain due recognition in the United States and Europe is because, unfortunately, too few people over here license artists’ songs while they’re still alive. But one can’t fault Redjeb for his efforts: Legends Of Benin is still a worthy collection and a great resource for both the public library and the local club’s Afro-beat night.