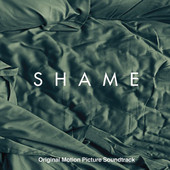 Though Nicholas Winding Refn’s Drive features last year’s most widely celebrated original soundtrack, I think, in many ways, Steve McQueen’s divisive Shame boasts the more smartly curated one. Drive was scored much like it was shot: its surfaces contribute to a particular feel, one that’s both singular and seductive. It did this very successfully—so successfully, in fact, “the Drive soundtrack” is already accepted shorthand for anything synthy and ethereal. But as a whole the Drive OST never really comes together, its infectious synth-pop numbers totally at odds with its Badalamenti-copping score stretches; heard in one sitting it just sounds like four and a half cool songs glued to the front of an extended ambient record.

In theory, Shame‘s soundtrack should face an identical difficulty: its moving, melancholic string sections don’t have much in common with Chic’s “I Want Your Love” or Blondie’s “Rapture,” both of which feature prominently in the film and here. And the disc makes no effort to mask the potential awkwardness, allowing the tracklist to follow the film in chronological order—thus we move from weepy strings to Bach to Tom Tom Club and Bach again, as the sound in the film does. Somehow, perhaps even incidentally, this works, and as it moves from one disparate element to another you’ll find that, in practice, it all fits together rather coherently. You could say that the narrative of the film, transposed musically, has survived the translation from image to sound. But even if what we’re hearing as a whole retains only the residue of the story the film relates, it carries forward its emotional arc and balance clearly and in full.

All of which is to say that the Shame soundtrack lends itself surprisingly well to a one-sitting listen, which is rare for a soundtrack cobbled together from mostly unrelated sources. Here the source material can be divided roughly in three: there are licensed pop and jazz tracks, which are of course well-selected (and thematically well-suited); there are Glenn Gould’s Bach recordings, which function almost like transitional pieces; and then there are the two original string pieces, composed by Harry Escott, who also provided the notable score for last year’s acclaimed documentary The Arbor. Escott’s arrangements make up a relatively slender portion of the running time, but, as in the film, they are very clearly both the focus and the highlight of the soundtrack. Unabashedly romantic and maybe even indulgent, these pieces acutely convey the sadness at the core of the film, and they resonate so intensely that their sentiment inflects everything that follows.

This is especially true of “I Want Your Love,” one of Chic’s less overplayed singles that, like so much disco music, seems sadder when the party’s over. Here it caps off a three-song run of ’70s and ’80s pop hits—each a bass-heavy deep cut, indebted to funk but resolutely pop—bookended by Bach and John Coltrane in a way that isolates their irreverence, as if to keep any glee in check. To me this shows an impressive degree of consideration and restraint, where even background tracks (two of those pop songs score a clubbing scene in the film) are thematically relevant and aesthetically appropriate—even if few are likely to notice after a cursory look or listen.

One thing everyone will notice is Carey Mulligan’s molasses-slow cover of “New York, New York,” centrepiece of the soundtrack and the film, and still something of an acid test for audiences. Some find its deliberate pace off-putting, but without the attention-grabbing visual corollary (one long, nearly unbroken close-up of Mulligan, following the song from start to finish), the song itself is left to hit you as it should: it’s spare, elegant, and completely disarming, as potent as it is audacious. I expect that, as was the case with the film itself, the Shame soundtrack won’t find a universally warm reception. Escott’s sweeping, urgent strings are an easy target for dismissive sniping, but I find the style—what is essentially a romantic sensibility, really, considered outmoded by McQueen’s contemporaries—refreshing, a welcome change from the cynical asceticism of most modern arthouse pictures (and the soundtracks which accompany them). Shame, despite what its detractors say, is a deceptively old-fashioned project, stylized and artful, and its soundtrack follows suit, offering style but sounding classically good as an album.