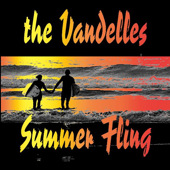 As a Midwesterner, I’ve always had a tendency to romanticize summer, to search for that right mood-music come final spring thaw. At that point, all bets are off: bands I might ignore in less forgiving seasons will feel at home on my stereo come June. And maybe it’s only the Midwesterner in me longing for more than the typical grey of the skies, but perfect summer music should fit hand in hand with unattainable fantasy, with nostalgia for an imagined past (the beach, convertibles, boys, and bikinis) rather than my real summer memories (lying on the floor, watching reruns). The Vandelles’ new EP, Summer Fling, caught my ear for precisely that reason; it’s a well-executed surf-rock throwback meant to soundtrack your picture-perfect summer, whether it’s a reality or not.

The Brooklyn-based Vandelles, who released their first self-titled EP last year and subsequently earned spots at CMJ and SXSW, aren’t doing anything new, but they’re having a lot of fun doing it. Summer Fling is ‘60s-inspired rock merged with shoegaze guitar, a sound that instantly recalls a band like the Raveonettes, except without so much overt kitsch. It’s easy to feel bored with the amount of Jesus and Mary Chain/early My Bloody Valentine imitations making the blog and festival rounds these days, but Summer Fling is charming enough to forego knee-jerk dismissals. Its appeal lies solely within how short, casual, and perfectly balanced it is. Without working too hard to replicate any specific sound and washed in the same warm nostalgia as its familiar but broad range of predecessors, Summer Fling is a slapdash tutorial in summer, er, flings. And that’s about it.

The whole of Summer Fling, as you’d probably expect, is fuzzy and reverb-heavy, with occasional moments of chiming clarity—at times similar to a band like Beach Fossils if Beach Fossils made party music instead of lost-soul headphone stuff. “Get Around” kicks off with some woo-oos, some garage-punk guitar, and all the tremolo one could ask for. Jason Schwartz and Lisha Nadkarni’s nicely harmonic vocals are a bit low in the mix, so it’s difficult to make out what they’re saying. One can assume, however, that it has to do with season-long dalliances that end with the first cool autumn breeze.

“My Time” is the EP’s highlight—here the Vandelles tone down the noise and head straight for jugular, allowing heart-tugging, swooning guitar lines to crop up between verses. The track begins with a gentle, tropical-ish riff and builds steadily into soaring verses. “I can feel it comin’ when I close my eyes,” Schwartz sings, talking about love, surely, but also the feeling of waking up slowly on that fateful, first true summer day. “I’m just another of your summer guys,” he adds, his tone betraying more joy than regret. “My Time” really hits a sweet spot at its chorus, which explodes into unintelligible, megaphone vocals; the song loses itself without drowning.

“My Time” arcs assuredly into “Summer Fling,” which is more predictable but executed with its chorus of do-do-dos and half-sunny riffs. Nadkarni’s ethereal vocals take center stage for about half of the track, but it’s Schwartz’s distant, fuzzed-over tenor that anchors the song. In keeping with this EP’s tossed-off air, the Vandelles have included two covers here, which, surprisingly, mesh tightly with the EP’s overall vibe. The first is a faithful reproduction of the Cramps’ “Aloha From Hell,” flavored with standard creepy-beach-party lunacy, and the second is a more shambling take on Spaceman 3’s “Losing Touch with My Mind,” just menacing and sexy enough that it offsets the sweetness of the earlier tracks perfectly. After all, even a carefree afternoon in the surf can have its dark side. And even if a little EP about the summer may be just a trifle, the summer isn’t a time for heavy things. Summer Fling will offer you something buoyant, not weigh you down, and that’s a feeling we can all appreciate, even if it lasts just eighteen minutes, or a season, or no time at all.