Other Records by Various Artists / Kay-D 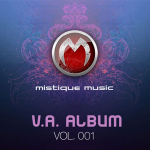 In my review of Mistiquemusic’s first compilation last year I mentioned just how prolific the nascent web-label had been in 2009: eighteen releases in eight months. In the two and a half months since I wrote that, they’ve managed another sixteen releases and launched sub-label Mistique Digital; it simply doesn’t seem possible for such a small independent label to release so much stuff so quickly and not suffer a dip in quality. Yet here are two new, significant, and widely different releases that make the convincing argument that Mistiquemusic is only just hitting its stride.

While V.A. Album Vol. 001 was a mixed bag, it was a laudable attempt to branch out the label’s sound using up-and-coming artists new to the roster. V.A. Album Vol. 002 does exactly the same thing, but this time there’s no need to praise the ambition—the execution is dead on. As before, 002 pushes Mistique into new realms, but where the first album predominantly attempted the kind of prog-tech crossover countless producers have already taken out second mortgages to try, this goes for something almost nobody has put their mind to: a progressive spin on deep house. And it’s awesome.

Everything starts, innocuously, as before: cue perfunctory beatless opener, this time from Faces, followed by a chilled out breaks track from Doxx & D-Slide. And then the house beats start. But a few minutes into Stereotekk’s “Play That,” one notices a soulful diva looped into the mix, a sample that might seem clichéd in a conventional deep house track but unexpected here. Then one realises Jaksa Pavicevic’s “Ayme” has a fucking slap bass and the record is suddenly trekking into unexplored and deeply, deeply danceable territory. Track six even brings in wah-wah guitar licks alongside twisted cosmic synths to create a mind-boggling space-funk continuum between the 1970s and cutting-edge, digital progressive house. And while the remaining four tracks are much closer to the standard Mistique fare of melodic, clubby beats, they’re still uniformly solid selections that wrap up a compilation streets ahead of its predecessor. What’s so exciting about VA Album 002 is that it displays Mistique not just as a label perfecting a niche, but as a brain trust actively constructing new paradigms, with hugely satisfying results.

Then there’s Kay-D, who stands for almost exactly the opposite of what VA 002 represents. Kay-D isn’t a newcomer to the label, he’s been there since the start and, along with Michael & Levan, Stivin Rivic, and Domased Electronica, he encompasses the core sound of the label. Where the best material on VA 002 is warm, playful, soulful, and, I write warily, even human, Kay-D’s music is vast, ethereal, sombre, and stunningly technological. Source Of Miracles as a title, twinned with its computer-generated cover image of deep space, suggests a more cerebral (as opposed to spiritual, say) fascination with the beauty of the universe, and his music seems like a sonic simulacrum of that apparent beauty. Indeed, Sources Of Miracles almost seems like a musical equivalent of Avatar in its painstaking recreation of a soundscape more vivid and awe-inspiring than anything readily available on this side of reality.

That a given, this certainly isn’t an album for everyone, particularly if you struggle with techno that tends towards abstraction. The mood of Source Of Miracles fits no natural human emotion; it’s a strange blend of melancholy, muted euphoria, and that almost intangible pleasure one gets from witnessing a jaw-dropping cloud formation…or the background vistas in Avatar. But where Cameron’s blockbuster lacked substance in its plot or characters, in seeming opposition to the grandeur of its special effects, Kay-D doesn’t get so lost in constructing pretty nebulas of synth layers that he forgets to write any melodies. This is an album that keeps its priorities in check: the beats aren’t an afterthought to what is essentially a glorified ambient headspace (they’re crafted to work at 3 am); its bass lines are rumbling, sometimes cataclysmic grooves that will massacre the right dancefloors; and the music is kept grounded when Kay-D’s widescreen polyphonics might otherwise drift into deep space.

This is a big album, make no mistake: over 90 minutes of music spread across eleven densely constructed tracks. With so much going on and too many different influences, structures, and techniques to quantify in detail, Kay-D’s danger with his latest release is that its scope could tip over from big into bloated at any moment, that the “progressive” tag will come back to haunt him. A fair complaint, and Source Of Miracles is not a particularly well-structured long-player. A couple of brilliantly crafted intros are scattered across the album, and yet opener “Levitation” has a utilitarian percussive intro that takes over a minute before the actual song proper begins. The soaring peak moments, such as “Hypnotized” and the magnificent “Clear Source,” seem rather arbitrarily placed midway through the running order, as does the sole downtempo moment “Purple Water,” and “Beautiful Stranger” is an incongruously low-key closer for such a big album. At times, this epic journey comes close to rambling.

Ultimately, though, there’s a distinction to be made between grand and grandiose, between soaring and bombastic. In a week when Joanna Newson releases three discs of harp pop, it’s faintly absurd to be too harsh on the deliberately vast for being, well, big. Besides, the low-end dancefloor bedrock of the album prevents it from absconding into the digital ether, and no matter how sweeping it becomes, Source of Miracles never loses sight of more earthbound concerns. In their different ways, Album 002 and Source Of Miracles both forge out into new frontiers, one musically, in its unlikely hybridisation, and the other in its rendition of digitised deep space. But no matter how far they push the genre boundaries or the technology, both remain devoted to the dancefloor. In doing so they capture the trajectory of Mistiquemusic thus far, somewhere on its way to becoming a genuinely great label.