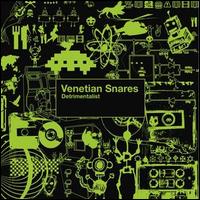 There’s plenty to dissect in these four lines from “Gentleman,” the opening track from Detrimentalist, the latest breakcore madness from Venetian Snares. But before I do that I’d like to acknowledge that what follows is, perhaps, reading far too much into the mindset of a musician whose compositional thought-process could be described as “fucking mental.” Additionally, Aaron Funk—Venetian Snares’ own Clark Kent—has repeatedly threatened to violently dispose of critics who write about him.

But wish me luck: I’m going in. At face value, these lyrics are a middle finger to the imitators who went out and bought Renoise after seeing the video of Funk’s song “Vache” and thought their obtuse keyboard mashing was artistic gold [quietly goes to erase own cache of half-baked .rns files]. It’s hard to blame the wannabes, though; at the rate Venetian Snares albums drop, Funk makes his creative process look easier than it is. It doesn’t help that he’s cultivated a public personality of looking like a scraggly crusty and nonchalantly referring to other breakcore producers as “fucking twats.” The sample from which “Gentleman” derives its title, for example, is a man narrating the dire situation of his computer files having been stolen. It’s hard to make the metaphor much clearer.

But, don’t be fooled: prankster though he may be, Funk is also a brilliant musical mind. Those songs that you can’t dance to aren’t arrhythmic, they’re just written in uncommon time signatures, from the Venetian Snares standard of 7/4 (say “apple apple pineapple” repeatedly to get that rhythm going) to the outlandish/cartoonish realm of 19/11 (“Nineteen 1319”, off 2004’s Huge Chrome Cylinder Box Unfolding). It’d be simple to think that Funk is just using the same well-written algorithmic beat-reorganizing patch for every track, but the reality is that far more tireless blood, sweat and tears (especially the first one) go into this.

There’s one more thing about those lyrics: they’re sampled from KRS-One. The original song is called “Phucked,” and, in the running for “most obviously uneven beef of all time,” it’s aimed at Nelly. Like Funk, KRS knows that it’s clear who’s got the money and who’s got the soul. Though, for a breakcore producer, Funk is probably doing a lot better financially than the grimy chav from down the street with a pirated copy of Reason. Funk makes no effort to hide his alterations to the sample, pitching the words “Venetian Snares” up, just to make it perfectly clear, the skill and like-I-care attitude with which he can take another’s lyrics and co-opt. Once again, the technical wizardry is somewhat hidden: the verse is time-stretched just so that a 4/4 line fits into a 7/4 track. Either working his ass off to perfect the minutiae on these tracks has become routine for Funk, or he just wants us to think it.

From its busy cover art to the gibberish and video games breaks and samples, Detrimentalist fits on a continuum of other smirking noizecore Venetian Snares releases, including 2006’s Cavalcade of Glee and Dadaist Happy Hardcore Pom Poms (a very apt descriptor) and Higgins Ultra Low Track Glue Funk Hits 1972-2006 (2002). This is Funk at his silliest, shedding the oppressive darkness and shattering symphonic beauty of his other facades. Just look at a track like “Sajtban”, with its tongue-twisted scat urgency, or “Poo Yourself Jason”, a bite on friend and Planet Mu label owner µ-Ziq’s 1997 single, “Brace Yourself Jason.” “Eurocore MVP” contorts its reggae sample into staccato video game madness, like the soundtrack to a cartridge glitching out horribly.

One of Detrimentalist‘s most distinguishing features is its nightmarish rave melodies. “Circle Pit” recalls jungle’s darkcore predecessors, taking the toytown piano stabs of goofy rave hits like The Prodigy’s “Charly” and chopping away with a sinister smirk. The result is something like a darkly funny carnival of breaks and synth stabs, interspersed with the call to action, “It’s time, Super Ninja!” Ambient rave also gets it day on the beautiful album closer, “Miss Balaton.” Soft organ chords breathe gently in the background while the breakcore acid madness dances around it. It’s this kind of vulnerability that Funk brings to his music that constantly keeps listeners on their toes: it’s not going to throw anyone for a loop to hear raunchy sex noises thrown about and distorted here, but these emotional melodies, coming after an album of such consistent mentalism, are liable to blindside the listener.

As with other Venetian Snares albums that focus on this kind of epileptic breakcore, strong melodic structure is hard to come by. Of course, music this frenetic and mindnumbing isn’t meant to be hummable, and Funk has an uncanny ability to sneak in oddly melancholy jungle-saw basses in the madness, such as on the aforementioned “Jason.” On the other end, there’s a track like “Kyokushin,” which cycles through a full clip of acid bass lines but fails to make a lasting impression. It’s best to just acknowledge this caveat as an inevitability on any crazy breaks record by Venetian Snares, and instead focus on the fact that Detrimentalist is one of the more solid sets of breakcore madness in the Funk oeuvre, fit to stand alongside masterpieces like The Chocolate Wheelchair Album (2003) and Higgins. If you don’t like Venetian Snares, this album isn’t going to change your mind, but it’s another strong set of what Funk does best.