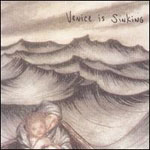 Sorry About the Flowers

Over the last two decades, Athens, Georgia has been the bearer of one of underground rock’s strangest and most productive histories. From the rise of R.E.M. and alternative rock to the psychedelic explorations of the Elephant 6 collective, the city has been home to an array of seminal artists and movements. But with R.E.M. long past relevance and much of Elephant 6 dissolved or defunct, the scene seems due for another explosion of rock progress. On debut album Sorry About the Flowers, Venice Is Sinking may not reach that lofty expectation, but there’s fresh air cupped in their eager hands.

Admittedly, the band has a pair of obvious influences in the slow gestalt of Low and Galaxie 500, though the generous use of strings and medium tempos often leaves Venice Is Sinking with one foot in chamber-pop territory. The Low-like vocal similarities are immediately evident, though not derivative; like Mimi and Alan Sparhawk, violinist Karolyn Troupe’s high-pitched harmonies ghost over singer/guitarist Daniel Lawson’s dry-throated intonations in hypnotic fashion. The distant, luminous singing works well on poppier tunes like “Tours” and “Undecided,” a cookie-cutter chamber-pop song rife with Belle & Sebastian strings. Meanwhile, “Andropolis” matches Galaxie 500 offshoot Luna’s guitar pyrotechnics and flat-voiced tunefulness, note for swooning note.

Though successful on tracks like these, the orchestral elements aren’t always the best fit for the album’s two gloomy minor-key forays. The strings’ elegant swell fails to mesh with the guitar bombast of “Buried Magnets” (though the song’s minimalist verses make up for the oversight), and “To Your Ghost” is all brooding without a hint of hope. For the most part, Venice Is Sinking is an accomplished enough band, but one lacking in variation; the songs miss the moments of aching beauty or electric force that provide the payoff for Low’s slow burn.

Sorry About the Flowers saves its biggest break from expectations until its final song, “Blue by Late”: at 19 wordless, ambient minutes, it’s a confusing, aesthetic-focused finale to an otherwise song-based album. The piece recalls Eluvium’s softly moving snowdrifts, wrapping gradual motion around constant, wavering drone. While the track doesn’t break new ground for ambient, it’s a strong enough snapshot of the genre to beg the question of why the members of Venice Is Sinking aren’t making this kind of music full time. But who can blame them? After all, Athens has always been a guitar kind of town.