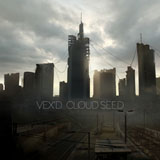 The split of Bristol-based duo Vex’d has left a noticeable gap in the dubstep scene. One of the first acts to deliver a successful and critically regarded dubstep long-player with Degenerate (2005), they were at the head of a genre just beginning to seep out of the grimy London loft parties and pirate radio transmissions to reach bigger audiences. So now that the genre has exploded outwards and colonised the far corners of the clubbing map, Vex’d might rue their split in the same way their fans rue what could have been had they stuck at it.

Cloud Seed is an attempt at offering a dose of painkiller: Vex’d duo Jamie and Roly get a few more royalties, Planet Mu get a little more worth out of their once-prized asset, and fans sort of get the second album they’ve been after. Because Cloud Seed is actually just a loosely united collection of productions, B-sides, and remixes, some of which might have made it onto a supposedly planned second album and some just collated here for convenience. In other words, there’s precious little the devoted Vex’d fan won’t already have heard, and even if that weren’t the case, nothing really coalesces to form any kind of satisfying whole or long-form listen.

Scraped-together compilations are never going to be the most coherent of releases anyway, but Cloud Seed is incongruous right down to its bones. The title and cover art suggest a delicate, picturesque, even spiritual record, but the music itself is much darker, epitomizing dubstep’s tendency to worship the desolate, echoed spaces between its sparse elements. A consistent tone is the one thing that stops Cloud Seed from sounding completely arbitrary, but too many tracks end up not just disparate but like barely hashed out musical sketches for Cloud Seed to even succeed as a mood piece.

Cloud Seed’s first three tracks are probably its worst offenders. Opener “Time Out” was first seen on a Planet Mu sampler from 2008, and with its combination of heavy rattling percussion and Warrior Queen’s menacing toasting it sounds like an amateurish mimicking of the apocalyptic fury of the Bug’s London Zoo (2008). It’s followed by the haunting ambient piece, “Remains Of The Day,” which samples from some choral modern classical, and then “Heart Space,” an awful, melancholic spot of trip-hop featuring vocalist Anneka’s bizarre lyrical metaphors about eating steak and ribs. These tracks suggest three very different and utterly unrelated directions the album could take—try: experimental dubstep, avant garde ambient, or throw-back to those lamentable days of the “mature” and songwriter-ly dance albums, circa 2001—and yet it goes in none of them, floundering through long-winded, dark dubstep (“Out Of The Hills”) and here-nor-there ambient skits before finally arriving at the Plaid remix.

Which signals the beginning of some fully formed, interesting cuts. While the second half still oscillates between quiescence and hyperactivity, the tracks are seemingly (finally) resolved renditions of the dark dubstep and brooding ambience touched on earlier. For its last half hour, Cloud Seed does pull together, but by that point the album’s spent too long flipping through a slideshow of somewhat interesting, underweight ideas with little to latch onto. What lurks deep within Cloud Seed seems to be a much more experimental and mournful thing than even the thunderously danceable Degenerate, and the remixes of Plaid and labelmates Gabriel Prokofiev and John Richards suggest a move towards more challenging material—what lurks deep within might have taken dubstep in a direction it’s still yet to really explore. Vex’d apparently, in their depleting time together, weren’t really concerned with that.