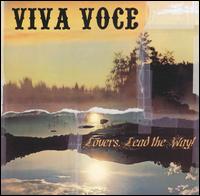 When one considers man/woman duos, a few spring to mind: most notoriously, Jack and Meg White of the White Stripes, Sonny & Cher and Donny & Marie Osmond. The aforementioned are either related or, more often than not, divorced --which leads one to believe that an intimate collaboration can either make you or break you as a couple. As for making it as a couple, straight out of Portland, Oregon comes the harmonious husband/wife duo of Kevin and Anita Robinson who call themselves Viva Voce. Their lovely collaboration has given birth to their second full-length, Lovers, Lead the Way! The title evokes what the album concerns itself with: love in all forms.

The most astonishing aspect about the band is that they recorded the entire album in the comfort of their own home and, surprisingly, the sound quality is impeccable and well engineered without even a hint of grass roots recording. Just as impressive is the fact that hyphenates Anita and Kevin wrote, produced and played the instruments themselves without resorting to computer generated technology.

"Fashionably Lonely" is the first and best song on the album creating a symphony of soaring and swelling reverberations, an onslaught of a classical orchestra full of melodious rhythms. Anita sings in her uncanny Julee Cruise inspired angelic voice, "It's gonna get lonely for awhile/till everyone else comes back in style." The rest of the fourteen tracks follow a sustained ethereal and romantic formula of whimsy and daydreaming and never succumb to darkness or extreme moodiness. The band mainly focuses on their instrumental presentation, which includes an array of keyboards, heavy electric guitar, percussion, organ, banjo, dulcimer, bass and hand clapping combined with Anita's sun drenched, startling voice. Kevin only sings on a couple of the tracks ("Red D-Lish," for instance, where he croons, "I cross my fingers you feel the same way as I do/Because it's my feeling too/And it makes me love you/I just do").

The following track, "Wrecking Ball," is complimentary of Luna. Here, Anita's voice channels Brita Phillips through her "baa, baa's" and use of hand clapping. "Yr Epic Heart" is a wholly mellifluous instrumental song with slow, methodical strumming akin to Air or Zero 7. On "Salsalito," Anita sings about hiding her love from that special someone; "I'm right by your side/And you're what's on my mind." The last song on Lovers, Lead the Way! is "Let's Bend Light," a lengthy and primarily instrumental track filled with distorted, full blown guitars.

Viva Voce's sound is an interesting combination of the familiar and the new; simultaneously parallel to every melodic indie band such as Yo La Tengo, Azure Ray, Air and the Darling Buds, their sound is also at times, though not often enough, indefinable. The first few tracks are more consistent and well suited for repeated listening than the rest of the album, which begins to taper off after track six or so, and Anita and Kevin could benefit from finding a more distinctive voice, but they definitely should continue to cultivate their homemade production work because it seems to work well for them. Viva Voce translates to "by word of mouth," and that is exactly what Anita and Kevin need to catapult them towards the stratosphere, so start spreading the word.