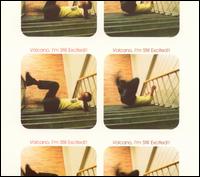 Tweet
A decent name is usually integral for a band to garner attention (Hoobastank being a sad, sad exception), but even better is an unusual, non-sequitur band name. Examples: Neutral Milk Hotel, Teenage Jesus and the Jerks, Say Hi to Your Mom, Thomas Jefferson Slave Apartments, and Voluptuous Horror of Karen Black (she starred in the memorable films It's Alive III, Children of the Corn IV, and Easy Rider). Continuing with baffling band names, trained musician Mark Duplass leads the way along with Craig Montoro and John Thomas Robinette III with their Austin cum New York band, Volcano, I'm Still Excited!! A rumor suggests the name is a homage to the mediocre Tom Hanks film, Joe Versus the Volcano, but either way it'll evoke conversation.

Volcano's sound can best be compared to the quirkiness of Spoon, Elvis Costello, Beulah or Montoro's other band, Mates of State -- Duplass even recalls the Shins' James Mercer at times. Their eponymous debut opens with a 19 second amalgam intro of a dizzying display of instruments that quickly segues into the first real track, "2nd Gun." Its strummed guitar is quickly followed by a Unicorns-esque Casio keyboard (which is brilliantly ubiquitous throughout the album) building the harmony to the sing-songy lyric: "I miss you Kate, all around" -- all of which leads to a chorus bursting with exuberant, adrenaline rushed, pop joy that makes this the best song on the album and possibly one of the best songs I've heard all year.

"Trunk of My Car" follows, incorporating the use of rounds, another technique that runs rampant on several other songs. The song starts off with a nice, quiet a cappella before slowly adding percussion and keyboard. The round works for the band because it's a refreshing technique rarely explored by rock musicians today. "Fisticuffs" has a strong organ solo that blends well with the track's infectious feel, show off Volcano's multifaceted instrumental arrangements and their knack for integration into a variety of tunes. "Echo Park" is the slowest song on the album clocking in at one minute with a plaintive instrumental piano solo. Unfortunately, this is where the filler starts. It doesn't seem practical to have an interlude that is one minute or less and call it a song (like the first "track" on the album, "Overture").

After this track, the album loses some of it's momentum with mainly forgettable songs until the romantic "Around a Dream" evolves. It starts out light and airy and soon becomes a heavier song with pounding drums and electric guitar as Duplass exclaims, "But those fingerprints, the cigarettes, the open door and your open dress/I'll follow you around the dream." They add some "ahhs" and keyboards, letting its infectious melodies and blithe, uplifting chorus give "2nd Gun" some competition. With a somber and string induced arrangement, the penultimate track, "Byron's 24th Christmas" strays so much from the more cheerful themes it completely contradicts the rest of the tracks on the record and thus feels very gratuitous. Thankfully, the final track, "Two Exclamation Points," ends the album on an optimistic note with the recurrence of the round as they sing their moniker: "Volcano, I'm Still Excited!!"

Volcano, I'm Still Excited!! has fashioned an affable debut pop music album filled with fun, buoyant songs and interesting arrangements. However, the band falters with its reiteration of sparse, terse and sometimes incomprehensive lyrics. There are a few "filler" songs meant as interludes that do not really link the album together and are mainly there to prove to the listener they can play the piano. Despite the aforementioned criticisms, the band should carve out some sort of niche for themselves not only due to their head-scratching name, but also because of their unadulterated, entertaining and enjoyable love songs. Now that's something to get excited about.