Stand in the Fire 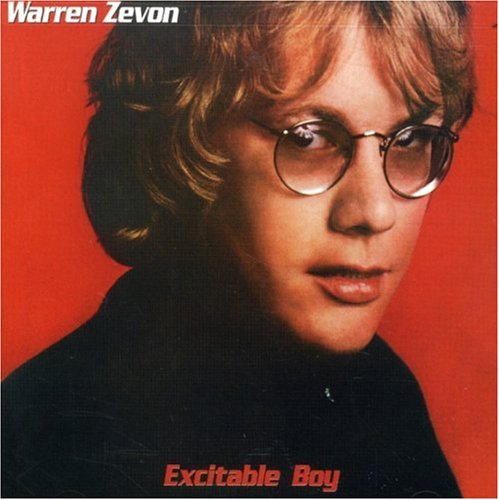 Excitable Boy / Jump in the Fire / The Envoy Reissue

Of all the contenders in rock history, the quasi-underground songwriters beloved by critics but overlooked by fans both casual and devoted, Warren Zevon was perhaps his own worst enemy. The newly published biography by his ex-wife, I’ll Sleep When I’m Dead, reads like a how-to in commercial suicide (step one: start drinking; step two: keep drinking), and one begins to wonder, while flipping through his pages, that perhaps it would best be marketed as a mystery: “everyone thought he was a genius; he had talent to spare; he had major label backing and a celebrity patron; everyone from Bob Dylan to R.E.M. played on his records; so why doesn’t anyone know his name?” The answer, as we come to find in the book, is simple: Warren Zevon. He burned bridges, wouldn’t play even the simplest moves of the game, made enemies, and drank himself stupid. Something Crystal Zevon never tells us, though—and something we come to discover through this recent batch of reissues—is that the dirty secret behind Zevon’s Underappreciated Genius narrative was that most of his records were actually kind of bad.

If this seems unfair, criticizing a talented songwriter whose records often struggled to sell 100,000 copies, it must be said that the evidence for that statement is overwhelming. Even his three best records (Warren Zevon [1975], Sentimental Hygeine [1986], and Life’ll Kill Ya [2000]) were very inconsistent. “Desperadoes under the Eaves” and “The French Inhaler” (both from the self-titled) may be two of the best rock songs ever recorded, but they sit alongside something like “Hasten Down the Wind.” For all of his justly celebrated cynicism, he would also give voice to his most unbearably sentimental instincts. In “Let Nothing Come Between You,” from The Envoy, he describes her mother as “a soft spoken woman, but she likes to speak her mind / and she said ‘de de de de de, de de de de de / let nothing come between you.’” It sounds as cloying as it reads, especially since Zevon had an especially limited vocal range, which isn’t in keeping with his extensive musical training. But even could be a strike against him, since he often employed the very worst traits of that experience: hot dogging, soullessness, a profound lack of imagination, and string quartet interludes for their own sake. The endgame was in his sound: Zevon’s patrons were mostly part of L.A.‘s so-called Mellow Mafia—Jackson Browne, Linda Ronstadt, the Eagles, Fleetwood Mac. The result is that his records reflect that aesthetic: airtight, hermetic, and pristine. Any rock n’ roll aggression is the result of simple frat boy posturing: rock n’ roll on a yacht.

Actually, that might be the best setting to enjoy “Lawyers, Guns, and Money,” the track which closed the original Excitable Boy album. It’s a great premise: the same character from “Poor Poor Pitiful Me” (from the self-titled, reprised on Stand in the Fire) bemoans his latest string of bad luck. He takes a Russian spy to bed, gambles with Communist money, and ends up pleading with his father to send him the titular objects to his hideout in Honduras: “I’m a desperate man / send lawyers, guns and money / the shit has hit the fan.” It’s a good joke, both in the lyrical sense and in the performer as a self-pitying, moneyed ne’er do well—sort of like Milo Minderbinder from Catch-22. But it’s a mean-spirited, particularly macho joke, and finding it funny (as this reviewer does) is an invitation to soul-searching. The fact that Zevon himself was a gun enthusiast and son of a Russian gangster (to say nothing of a general carouser, philanderer, and wife-beater) muddies the water a bit, since part of being in on the joke is the comfortable knowledge that the writer has distance from the material. If the writer doesn’t, how much of a joke could it be?

Excitable Boy has generated the most discussion of his career due to its novelty single, “Werewolves of London,” being his biggest hit. (When Zevon died, headlines around the country proclaimed “The Man Who Wrote ‘Werewolves of London’ is Dead.” I remarked to a friend that such a fate alone would be enough to drive a man to drink.) Guitarist and co-producer Waddy Wachtel told Crystal Zevon, “when Elektra chose ‘Werewolves’ as the single, Warren and I about threw up.” In truth, the rest of the record doesn’t really hold up either, marred by Jackson Browne’s production and placeholders like “Nighttime in the Switching Yard.” But it also contains one of Zevon’s best songs, “Roland the Headless Thompson Gunner,” a totally absurd ghost-revenge story made hilarious by his reading as a straight faced, unbearably pious protest song. He doesn’t give it away until the song’s coda: “Now it’s ten years later, but he still keeps up the fight / in Ireland, in Lebanon, in Palestine, and Berkeley….” Wait, where? “Patty Hearst! Heard the burst! Of Roland’s Thompson gun, and bought it!”

Stand in the Fire has a reputation among the faithful as one of the all-time great live albums, but this reissue proves that is sheer out-of-print revisionism (which would preferable to my gut feeling, undiscerning fan boy bullshit). If anyone’s catalogue cries out for stripped down and raucous interpretations of staid album versions, it’s Zevon. Unfortunately, he bought his coterie of LA studio playboys with him for these shows at the Roxy, and wrote two underwhelming new songs—the title track and “The Sin”—for the occasion. Although it does contain the definitive version of “Jeanie Needs a Shooter,” co-written with Bruce Springsteen (I’ve long wondered who contributed what to that song, since “Jeanie needs a shooter / a shooter like me” would sound redemptive in the Boss’ mouth but sounds gleefully macho in Zevon’s, a pressing question since the narrator buys it at Jeanie’s hand in the end). And this reissue appends a blazing take on “Play it All Night Long,” his take on southern gothic so bloodlusty and brutal that nobody could fuck it up, as a whole it’s a basically competent and thoroughly uninteresting record.

That leaves The Envoy, an underrated record even by Zevon’s standards. Although mired in 1982’s best production techniques (a particularly grating synthesizer ruins one of the album’s best songs, “Ain’t That Pretty at All,”) this may be his most consistent, if not most satisfying album. Recorded in the midst of a stab at sobriety, it’s probably the most trouble in mind he’s ever laid on tape. “Charlie’s Medicine” is a eulogy for his dead dealer (“I came to finish paying my bill”), “Jesus Mentioned” compares Elvis Presley to Jesus Christ (“walking on the water with his pills”), and “The Overdraft” has the line “no one sleeps on the yellow line / no one’s that alone.” If he had written “The Envoy” circa Excitable Boy, he may have made that song’s central character shoot his way out of trouble; instead, he has to find a way to keep peace. At first it appears ridiculous: “looks like another threat to world peace / for the envoy,” as if he were some superhero, and indeed the line “he has diplomatic immunity / he has a lethal weapon that nobody sees” seems more sinister. But it’s a fake out: the point of the song is that there isn’t a superhero, it’s just someone who has to work his way through it.

It’s no wonder the public stayed away after “Werewolves of London”; the jokes weren’t as easy, and the records became pricklier and difficult. (Although Terri Clark recently had a hit with the S&M tinged “Poor Poor Pitiful Me,” which says just about everything about both the song and the popular country music audience there is.) Listening to Zevon’s records, one is forced to keep a separate account of the albums that could’ve been: better singing, better production, more judicious arrangement. What makes Zevon a compelling figure to the fan also makes this trio of records frustrating: they are a promise unfulfilled.