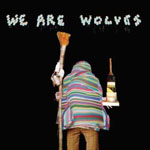 Funneling the menacing, humungous bile of the Liars into stripped down Electro-pop doesn’t necessarily sound like the best idea anyone ever had, so it’s a good thing that Montreal-based We Are Wolves are willing to have a ton of fun with the idea. Cranking out the dance floor jams for Montreal’s disaffected art students, and really, disaffected art students all over the world, the trio’s first record, Non-Stop Je Te Plie en Deux, does indeed bring the beat non-stop. It’s as if someone smacked DFA1979 upside the head and told them to be not only good, but to lose the bass and go experimental.

Indeed, We Are Wolves choose to rock the experimental side of the dance floor, reminding one of such fucked-up dance luminaries as Martin Rev and Alan Vega. WAW creates fractured, dirge-y soundscapes that sound somewhere in between Suicide’s better work and the Liars Blair Witch Soundtrack that are often juxtaposed with mile-a-minute beats and call and response vox. The album’s opener, “Little Birds,” opens things with a foreboding, whirring keyboard riff before diving into a macabre dance song, sounding like something that would fit right in with Mark E. Smith’s delicious dance-punk album, The Unutterable. “Snare Me” features a chorus of incomprehensible call and response vox that’s somehow catchy in spite of it’s garbled content.

Starting with some vintage arcade game samples (Space Invaders, I think), “Nonstop” showcases the band at their noisiest and also their catchiest. Pummeling with echo-filled beats and driving guitar, the song is one of the album’s most immediate. “T.R.O.U.B.L.E.” finds indie’s newest Wolf band on the prowl, “looking for some trouble,” and while they aren’t particularly clear as to what that trouble is, the album’s filthy title Non-Stop I Fold You in Two and songs like “Snare Me” and the funky groove of “L.L. Romeo” imply that whatever trouble they find will probably involve the opposite sex.

“We Are All Winners” is yet another strong song buried in the album’s hindquarters. Rocking the machine-canned handclap (oh, if I’d heard this song before our Top Ten Uses of the Handclap list…sigh) and featuring airtight beats, driving guitar and an excellent use of a crowd cheering sample as a musical element, the song is one of the album’s highlights and a definite nod to the weirdness of Suicide. We Are Wolves prove themselves here as not just another wolf band. And though no one will confuse their menacing, fucked-up keyboard love songs with Wolf Parade’s cathartic keyboard anthems anytime soon, they’re still one of the better wolf-themed bands going.