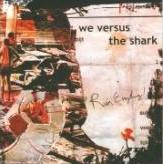 We Versus the Shark

Just when you thought the flow of smart-assed dancepunks had finally ceased, just when you were about to embark -- again -- on a long treatise titled “The Genre that Didn’t Deliver,” one last (surely this is the last) counterpoint comes out of nowhere (Athens, GA).
But We Versus the Shark aren’t really rote dancepunks, if we want to split thinning genre-hairs. You certainly can’t dance to a good deal of Ruin Everything! But then the conclusion of “This Graceless Planet” kicks into several bars of the most ruinously fun, complex dancepunk after the track’s multiple kickdrum-led passages. The Rapture shit their pants, Q and Not U go scarlet (especially after releasing Power), and amidst the bull-rush of wicked hooks and the unending flurry of bass figures, your head explodes out of sheer confusion. Two minutes ago We Versus the Shark were doing as good a job of post-punk anger as Drive Like Jehu on Yank Crime, and one minute ago they were as adept hardcore freaks as The Blood Brothers, and now they’ve punched out The Rapture’s teeth?

Yes, it’s overwhelming; we Versus the Shark are frankly astounding in terms of stylistic virtuosity. In their spastic freakout mélange of spazcore, hardcore, postpunk, math rock, and even pop (think The Unicorns on a dancepunk kick), We Versus the Shark somehow manage to keep mistakes to a minimum. Hell, they can even pull off Isis’s massively aggressive chord stabs---at the conclusion of “I Am Destined for Greatness”---without so much as blinking. As if they needed to double their wow-factor, they also happen to record most of it live.

Perhaps their greatest asset is that they handle hooks like a Japanese steakhouse knife, dicing them into their spicy sonic dishes with frightening speed and deadly accuracy. Opener “You Don’t Have to Kick It” goes through three hook modulations in under a minute, before balancing their dual guitars on complementing melodic knife-edges – it’s the kind of execution that’s as precarious as it is thrilling. In fact, “You Don’t Have to Kick It” may go down into the record-books as one of the most hook-packed songs in history; I counted at least seven in four minutes and 15 seconds. “Easter Island is For Lovers” nails at least four to your forehead atop some of the most rhythmically masterful drumming of the year. What’s so astonishing is that it’s just one of many similar example---the drumming and bass work on Ruin Everything! are consistently top-shelf.

The best approach to this kind of freakishly good album of multiple personality disorder is to take it as something like 50 set pieces pasted together with guitar-rock glue to form ten songs (totaling about 36 minutes, or half of Blueberry Boat). It’s not that the particular movements within songs bear no semblance of internal cohesion. Rather, the songs’ transitions are so blazingly fast, so sickly melodic, so hook-ridden, that an uninitiated listener expecting typical pop songs would find his grey matter painted on the walls when he was done with his first listen.

Of course, even unbelievably skillful transitions and stylistic virtuosity is going to result in a split seam or two---“I Am Destined for Greatness” is the only song here that readily reveals its parts to be greater than its disjointed whole. A few similar instances of irreconcilable disjoint, of overextended ambition exist, but you’d be hard-pressed to really care when beautiful hook after beautiful hook are pleasingly chewing on your disappointed-with-dancepunk brain. We Versus the Shark are relentless, ingenious, absurdly talented, and have finally registered a dancepunk (kind of) album worthy of your year-end list. Did I mention this was only their debut?