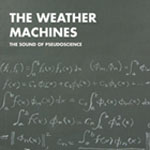 The Sound of Pseudoscience

Tweet
Shockingly enough, as much as I lose my shit over the complex artistry of technically terrific bands, the simple quality of accessible indie rock has a reliable niche in my span of musical taste. To this day I hold terribly dear my copy of both A Series of Sneaks and Hearts of Oak, for instance. Appropriately enough, then, The Weather Machines, who occupy a mid point between the FM rawkus of Leo and the minimalist punch of Spoon, are a frequent treat in my weekly music diet.

This is a group that does absolutely nothing revolutionary, but does it as deftly and cleanly as one could wish. And as the cliché goes, it’s often more pleasant to deal with such bands than those who are in the hopelessly silly business of overshooting their capacities with blindly ambitious songs. Instead, The Weather Machines stick to solid songwriting basics, building urgent verses and catchy melodies into concise pop kicks, all the while never forgetting a generous offering of hooks. The Sound of Pseudoscience is consequently remarkably consistent and never boring.

In fact, the brevity of these tightly-wound tracks bears a similar stamp to the songwriting ethic of Spoon’s A Series of Sneaks. Most of these tracks have an effortless quality to them, cycling efficiently through deceptively simple ideas with inviting ease. Even at their most average, on a track like “Me Too Iguana,” the group still finds time for a smart, unassuming guitar bridge despite the track’s vanilla choruses. But The Weather Machines sound inspired for the majority of the album’s duration, despite their evenly spread energy. “The Latest in Company Brides” is a quick chunk of greatness; it packs a superb bass lead cloaked in two alternating great hooks, and its chorus bursts with cymbals and rhythm. “Stains of Saints” begins with a glorious chunky riff that’s overlaid with an ethereal reverbed guitar figure, backed by Jason Ward’s far-off vocals. It then proceeds to acquire a solid bass line, an appropriately meditative rhythm, and steadily builds to its understated climax with the addition of a third riff to complement the already excellent first two, finishing with two different guitars that build a strong hook out of their complementing movements.

Ultimately, this stuff is finely chiseled, often muscular, and in its totality, highly satisfying stuff, largely because The Weather Machines know how to find a good set of three or four or five chords, and elaborate on those chords to great effect. Ward can hit his notes without any strain whatsoever, making for a plenty competent vocalist, and his occasionally urgent but mostly laid-back style complements his group’s form of pop-rock perfectly. With occasional variations in fills or rhythmic weight, and additions like “Fadeout Classic’s” ingeniously placed background harmonies, the band shifts its instrumental progressions easily and unpretentiously. With that kind of savvy songwriting understanding, The Weather Machines reaffirm the point that the unbroken mold can be an excellent one, especially when it’s this well-sculpted.