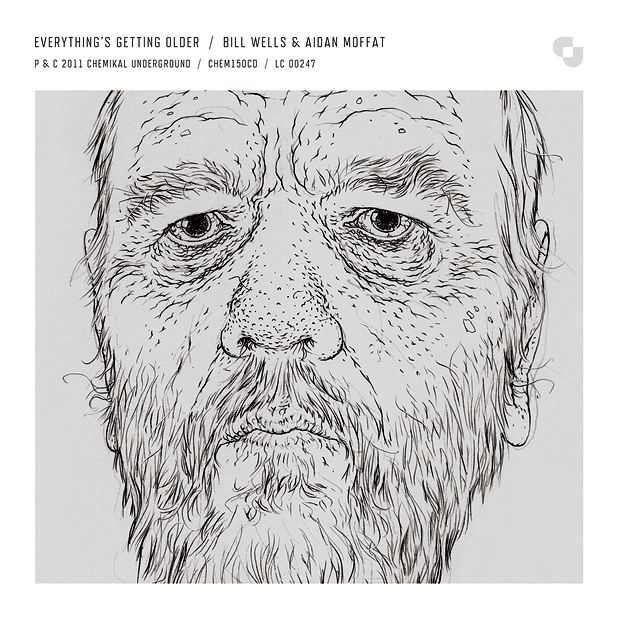 If you saw The Assassination of Jesse James by the Coward Robert Ford (2006) and thought, “You know, what this film needs is someone from Falkirk reading their diary over the weepy parts,” then make way for the record of your dreams. Aidan Moffat, now pushing forty and only slightly less tempestuous than he was when he was fronting Arab Strap, has jumped into bed with bassist Bill Wells—the same Bill Wells who mentored the Pastels, and who steered Isobel Campbell’s solo career in that smoky, more debauched direction. If there’s one person on the planet who doesn’t need more debauching it’s Moffat, so his followers are probably braced for an outpouring of sleaze now that he’s thirty-eight and swapping notes with Wells. Or they might be expecting the crafty switcheroo, where Moffat releases another album of instrumentals under yet another new alias. Both wrong.

Wells and Moffat once worked together before, with the former brought in on production duties for Arab Strap’s Monday at the Hug and Pint (2003). It was the duo’s richest hour, and also the moment both its members realised the mainstream was never going to accept them. Luckily for fans, that brief, elemental cocktail of dreamy production and sour memories has been harnessed here, Everything’s Getting Older proving that, despite his wrinkles and back ache, Moffat’s never going to shave his head/convert to Buddhism, and is still the scowling, contemptuous, but eloquent philanderer he was when he was tearing up the ’90s—except now, he’s a little more comfortable, and attacks using serene piano accompaniments!

Moffat’s sharpened insights first slug you on “Let’s Stop Here,” where the pacified hellraiser bumps into the town bike, and promptly hesitates, wrestling with himself. Not literally, though: gone is the man talking about playing with himself to images of his girlfriend’s sister, and instead we have a gentleman singing of the thrill of undressing a forty-year-old, his pulse racing even harder now that he’s forty himself and his beard’s gone white. He never bedded this girl in his heyday, and now he’s got the chance to put that right: “To squeeze a fist of hair / To slide my fingers underneath your dress / To solve a teenage mystery / To know what I could only ever get / But you’ve been gone for years / And I’ve fallen in love since you left town / I’m happy, I am spoken for / Attached, under the thumb, I’ve settled down.” You can picture the gradual disbelief on his conquest’s face, both her disappointment and his sudden good behaviour expressed through Wells’ piano playing, as sad as The Incredible Hulk TV titles. It’s one of Moffat’s ten revelations about the conflicts of middle age and How To Deal With Them, learning where to seek out his kicks now that he’s tangled with responsibility. This sense of duty even extends to the record’s mastering—it feels like it was recorded in some frosty old council hall.

But Everything’s Getting Older isn’t all about turning down divorcees and where to buy your Pampers (though he does flirt with that on “Cages,” lost in a blur of nasal hair/school runs/CBeebies). Moffat’s keen to experiment, and on the less introspective numbers he lets Wells reach further into his musty instrument cupboard. “Dinner Time” is a creepy audiobook, establishing mischief via erratic cymbals as Moffat takes a set of duplicate keys and enters his old family home. Bill Wells knows there’s no better way to burgle than to jazz, and as Moffat mutters his way through the chain of events—in through the front, access childhood bedroom, caught by new owner and then realise you might in fact be dreaming—the pair concoct a kind of Scottish scat. It’s a reflection of the feistier little ditties like “A Short Song to the Moon,” which uses psychedelic drumming to take your eyes off your sagging ass and instead appreciate the white orb in the sky. Remember Moffat’s one-time collaboration with Stuart Braithwaite of Mogwai? Wells does, and he would like more.

The album’s selling point, though, is its unflinching frankness. Best known for his hawk-eye and his refusal to camouflage his accent, Moffat starts opening up on Everything’s Getting Older and the clean freaks run for cover. “Glasgow Jubilee”‘s Shaft-style funk tracks a string of sexual encounters on the day of festivities, moving between lovers like an undiscovered STD. “That night in bed the married woman gets a big surprise / As her rarely frisky husband grunts and thrusts between her thighs…” The song breaks the fourth wall and ends with Moffat himself at the back of the queue, grooming a blue-haired groupie at his gig. The gloating here is the antidote to the funereal ache of “The Copper Top,” a spoken-word aside where Moffat drinks alone in his black suit, recounting details to block out the cremation he’s just attended. “Birth, love and death / The only reasons to get dressed up,” he mumbles, noticing the building’s oxidised roof as Wells plays café suicide music. It’s extraordinarily powerful; just one of many songs designed for clutching tightly as time catches up with you.

Listen to the voice of experience: the lack of girlfriend/lack of car/lack of good E are as painful today as the getting dressed up, getting older, death, and taxes are tomorrow. The two Scotsmen’s solution is simply to make yourself and others happy wherever possible, not fight so much, and embrace your own decay with a mix of wonder, consideration, and scathing humour (often so scathing you’re seventeen in a flash—big bits of Everything are seriously cruel, and you’ll feel guilty for enjoying many of Wells’ melodies). But as he turns down multiple requests for adultery and enjoys playing with his baby monitor, you can’t help thinking that Aidan Moffat’s turned a corner. He never tried to be cool in the past but he always got the girls, except now he’s forsaking his post-fuck bitterness for dentures, tenderness, tinkling pianos, and occasional explosive tongue-lashing. It’s resulted in an incredible album and there are many, many worse ways to age than that. Just think: he could be Neil Diamond.