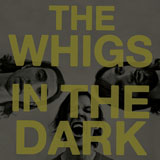 Most of the tossed off words about the Whigs label them as a scrappy Southern power trio indebted to the Replacements. While not entirely inaccurate, at this stage in their career I’d say they’re better described as Athens, GA’s answer to the Foo Fighters, trafficking in raucous pop-rock songs low on depth but big on choruses and instant gratification. In fact, The Whigs would probably like to think of themselves as a no bullshit rock band devoid of affectation. Whatever they resemble, they’ve found no need to alter what’s been so far a successful formula for them: Julian Dorio’s driving (and very loud) snare drum paired neatly with a huge hook courtesy of singer/guitarist Parker Gispert. And so, nearly every tune on In the Dark is built upon this partnership; this review practically writes itself.

The Whigs are still very good when operating at slower tempos, as exhibited by “Right Hand On My Heart,” the Pabst-swilling, swamp rock anthem from 2008’s Mission Control (that’s still their best song) that they’ve basically re-written for inclusion here as “Someone’s Daughter.” But the emphasis for most songs on this, their third album, is forward propulsion, highway-ready rockers like “Kill Me Carolyne” and “So Lonely” slotting in very nicely next to Tom Petty or Dire Straits on one’s hometown AOR radio station from back in an era when AOR DJs actually had something approaching autonomy.

And anybody who’s seen the Whigs live will tell you that they’re more than capable of raising a shitstorm onstage. If singer/guitarist Parker Gispert is technically their frontman, Julian Dorio is their soul, a whirling dervish of limbs and 90s grunge hair, absolutely one of the most entertaining (and precise) drummers I’ve had the privilege to see. Which leaves me boggled as to why In the Dark contains three different producers in its credits, chief among them Animal Collective guru Ben Nelson. The Whigs spent a bunch of 2009 touring arenas with the like-minded (if considerably lamer) Kings of Leon, and while it’s understandable they’d want a similar headlining slot, or similar success, at some point, the production gloss on In the Dark is incomprehensibly thick. Gispert’s vocals are unnecessarily treated, saturated; the loudness and compression is often ramped up to most efficiently invoke flashbacks of Sponge and (shudder) Live. Which I’m going to assume wasn’t part of their master plan. This is even apparent from the opening, “Hundred/Million,” where Dorio’s (otherwise impressive) four-on-the-floor drumming is processed to the point of aping some bizarre dance-remix tagged on the B-side of a ’90s Japanese import.

Baffling production questions aside, In The Dark is still another solid entry into what’s becoming a pretty spotless discography for a band with seemingly little aspirations to do anything but be a predictable answer to what a band called “the Whigs” would sound like. Would they’ve been better served by simply banging the shit out live in the studio sans overdubs and letting the rock speak for itself. Of course; while the overly gaudy production doesn’t completely overshadow the solid songwriting or energy levels they’re capable of consistently cranking out, it’s only annoying because such a crutch seems totally unneeded. We’re in a recession here, after all—I don’t need Dave Grohl-lite rubbing it in.