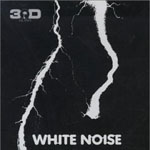 We were hit by a power cut right in the middle of dinner a few months back. I had forgotten how strangely disabling it was to be left without any modern conveniences. During the miners' strikes of the eighties we used to get them all the time, a sudden chromatic snap and everything shocked black in a stunned silence. The panicked peels of intruder alarms would hawk out in that moment of surprise -- no one spoke, everyone adjusting to losing a sense. It was always an oddly confused and suspended stretch of time. The increase in noticeable sound always unnerved me, things like traffic and street noise would become so much more apparent and concerning, I became alert and curious about every sound as if they were dangerous signals.

Stick with me, I'm going somewhere. Silence means something; absence means something. Island have decided to remaster and reissue White Noise's An Electrical Storm album, a landmark collection of spliced confusion helmed by David Vorhaus and various members of the BBC Radio Phonic Workshop. Their emerging skills at tape editing and primitive electronic manipulation were still feeling their way, but as they inched forward they were unwittingly forging fresh metal for future generations to pound out. It's an album that presents pale and hazy situations by drifting elements in and out of a narcoleptic, surreal vapour, framing these shards of sound in that aforementioned power-outage vacuum of hyper awareness.

It's a dangerously pretentious path to choose when talking about music, but the silence cupping these pieces of music really does play a vital part in their impact. There is no real comfortable space offered throughout the record as the structure is in constant flux, its heart a wide, dark void that sound tumbles through endlessly; while most of the album has a languorous quality, there is a distinct sense of hallucinatory unease at its core. The Hammer anthology films of the 60s had the same kind of budgeted torpor to them, the strangely harmonic wailing that swims throughout the album suggesting the eerie yet slightly hokey kitchen sink feel of the films' splatter setting, both artifacts oozing a distinctly British gloom. A large part of the album does strike me as being tied to the era it was created in; there's a real affinity to the sound of bands like the United States of America and Pink Floyd in the way the textural elements are woven into a collage, suggesting a willingness to experiment with certain wary and malevolent moods. Still, it avoids being a simple period piece by way of its ability to creep around the edges of your comfort and pick away at the seams.

Whether it's heavy with wet breath like the carnal sci-fi of "My Game Of Loving" -- which manages to blur the Beach Boys' wholesome aesthetic with both eastern and futuristic sonic influences -- or childish and slightly manic (as in "Here Come The Fleas"), there's a feeling of unsafe suspension, as though all outside stimuli have been removed, leaving you at the mercy of the album's own particular spectral vapours. That core facet of isolation and detachment really preserves this music. A lot of it is quite dippy and dated in terms of the themes explored, but it retains a true sense of presence through its ability to impose itself on the listener. This is a classic "headphones" record: achieving complete separation from the outside world is the optimum setting to experience what An Electric Storm has to offer. While divorced from other distractions and immersed in its hollow black chamber Vorhaus and his collaborators create a timeworn chasm of spooks to whirl around and leer at the listener.

The real meat of the collection lies in the final two tracks, both of which take subjects rife for parody and play them unerringly straight, yet still manage to convince. The teen death dream of "The Visitation" condenses the album's appeal into one epic wash of tension and white light lamentation, as a dead biker reaches back from the afterlife to revisit his lover. Given its clichéd Leader Of The Pack backbone, it relies on its ability to set the right tone, ringing the tragic event with a repeated cycle of road buzz and rubber smearing across tarmac; sure, there are wires in the air and you can smell the greasepaint, but given its primitive method of construction it's a remarkably atmospheric and accomplished piece of hokem.

The legend goes that "The Visitation" took so long to finish that Island were banging down the door to get their hands on the finished product, so the final piece on the album, "Black Mass: (Electric Storm In Hell)" was thrown together from a last minute group jam. Guaranteed to have scared the crap out of numerous unwary stoners who dozed away with their headphones on, this rush of jet phased drums and the screams of the damned is a classic bad seed. Again it harkens back to the dark oak and worried skies of early British horror, mimicking the flames and fog of a sunken ritual, split with jarring electronic tones that strike like brain seizures. Meandering and formless it may be, but there's a definite insidious illness dancing in its climbing red flames, which is true in part for the entire album, as it succeeds despite its apparent limitations. Even after twenty eight years the track still congeals into a singular, demanding collection of music. Whether by luck or by design, Vorhaus and his collaborators managed to aurally conjure up a cold black room to unleash their demons into, and it's that same sinister bottomless space that continues to hold them. Close the door behind you and fall into the darkness.