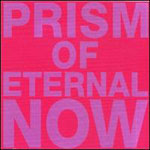 In 2004, Adam Forkner, who was calling himself White Rainbow even though he once went by his own name and appeared in many other funny sounding collaborative guises, released five CDs worth of music and a DVD and called it Box. Ambition pales, Thunderegg; Box is an obsessive conquest of identity and indulgence, the kind of heft that's astonishing but way too expensive, two remixes from an anxiety attack. On top of which, White Rainbow addicts himself to an instant, drooling over every calcified guitar tone or tabla hit until each track splays out unilaterally and the speakers sweat with the tension of gritting déjà vu. Maybe it's a test: is Adam Forkner really capable of floating such an exhaustive effort, keeping his Orange Julius motifs and carnal, compulsive layering together when his very sustainability as an experimental go-to studio fill seems to be bent on how precisely he slides into overblown genre roles? If only. Now I'm just jealous and Prism of Eternal Now kinda bowls me over.

What is so appealing about Forkner alone is that conceptually -- despite jonesing through work with Jackie-O Motherfucker, Thanksgiving, Yellow Swans, the Microphones, Devendra Banhart, and then only with Honey Owens as duo World -- White Rainbow's Kranky debut is his most focused and devoted accomplishment. His 2003 solo debut on K Records, [[[[VVRSSNN]]]], attempted the unabashed humility familiar to the label while introducing robotic drum tracks and dance floor spackle to temper an otherwise creaky folk layout. His modus operandi dwelled somewhere within the hyper-idealistic "spirit" of crafting dub variations on tracks and then building or paring them into wholly new contexts, immolating any ideas of permanence both in melody and image. But Prism of Eternal Now, still at a demanding seventy-one minutes, consolidates all of Forkner's revisionist impulses into a single drift -- more than cohesive, the album is sequenced with an almost tongue-in-cheek concision, ending up like a garish birthday cake with a wrinkled nebbish cocooned inside.

Which means that opener "Pulses" exacerbates the Technicolor, grinning patchouli packaging of the album by etching shaker, paint can, and tabla pops into a disarming fog, then piling on paroxysmal coos and a bassy synth dripping with windshield wiper fluid; what initially storms in as sloppy or even unnerving (psych guitars enter stage left, cast in NASA polyblends), becomes a delicately assembled matrix once the din settles as din. "Middle" then asserts a sort-of-vague intent, pushing themes of narcotic ambience under the clipped triads established in the vocals from "Pulses" and then dragging them under more eulogistic dust, dropping the middle note an octave, say, or sustaining the tonic through patient globs of pink thrush where it once was brashly syncopated. "For Terry" picks up the organ bleat of "Pulses," again, but offers no hope for catharsis, instead wanking fuzz and phased chimes all over the jittery (obviously-)Riley dirge, flaunting the song's close as relief as opposed to the opener's triumph.

Essentially and ostensibly, the album follows that pattern, rewinding into grass-green footprints in the snow and then stepping forward, slightly to the right, chafing with wet boots through another milky silt of crystals. Where this looper's dream could amount to didactic lessons in timing and bravado, Forkner depends on visceral cues, allowing shifts in mood and landscape to grapple with pieces of the whole, sympathetically not symbiotically. This study in context drives straight to the heart of ambient music, almost too cleanly, placing the burden of White Rainbow's extreme swathes of freak-out noise or pastoral curtains in the efficacy of whatever atmosphere the listener's willing to trust; at the same time Forkner exploits a listener's familiarity with such sub-genres in order to relentlessly dissect a certain processed tone, or chord progression, cadence, or instrument. The effect is both cheap and rigorous, so much so that by the time "Guitars" passes the five-minute mark, the conceit has run infuriatingly dry. Same with "Waves": a record like this can only escape boredom or punishing monotony with a scalpel.

And so, my criticism itself requires recontextualization. While Forkner's been talked up as a man of impeccable editing ability, evaluating every corner of his craft, he needs to discover a new strain of restraint, to further couch his excursions in hardier admissions of palatability. To cut a few minutes off a track that lives up to its title and more. To hone into an even slimmer mood; a tall order from here, sure, but then again, the guy's never exactly been easy on himself.