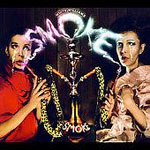 Smoke will get things moving in your digs for pre-party cocktails and post-rage after-hours sessions. It's easily digestible, it's funky electronica with intelligence, a far cry from a Matthew Herbert wet dream or an Autechre snot bubble, lapping up its smarts from the collecting dust of glam rock's vinyl strut -- Bowie at his early '70s sexiest, Marc Bolan at his sturdiest, and Eno at his hungriest -- and running it through the fickle motherboard of a MacBook. Joe Williams, the mastermind behind White Williams, layers a litany of quirky synths and vintage guitars over his meticulously programmed laptop beats and when his formula is on-point it churns out red-hot MP3 blog candidates like "New Violence" and "Headlines." I'm not quite sure what songs with titles like those really mean beyond their face-value suggestiveness, but they feel like important well-chosen titles. I'd really like Williams to tell me all about this "new violence" in the streets of our cities but I can't even get to that. I'm just robot-freaking in my bedroom, my arms cutting up and coming down like guillotines, slicing shit to shit.

The first three songs are especially catchy but beyond that these mostly mid-tempo tracks inoffensively plod along in the background like, ya know, like chill party music. It's not Williams' penchant for the innocuous that worries me; I'm concerned that, despite the tip-top synth arrangements and tasteful guitar noodling, his hard work often reeks of genre exercise. He knows his heroes, particularly Eno, and emulates them well, but if I had to I really couldn't tell you if "In the Club" is an Electric Warrior (1971) b-side or if "Smoke" was lifted from My Life in the Bush of Ghosts (1981). And then Williams has his way with new wave revivalism on "Route to Palm," sounding like Clap Your Hands Say Yeah sounding like Talking Heads, driving my descriptions into the allusive ground. Point is, he's often lax in carving out something truly his own, vying instead for visceral redemption and coke-fueled, semiotic baiting.

I mean, do we really need an approximation of how Eno and Byrne would have covered the Bow Wow Wow's "I Want Candy"? (Well, actually it sounds pretty damn good and that's the thing about Smoke: there's no shying away from the nostalgic appeal of its songs.) If dude really gets a kick out of re-creating an entire decade on computers then he should carry on and forget I ever said anything about it because he's still got a lot of cases on his docket. But then I'll go ahead and assume that's not his goal. Conceptual artsy-leaning live performances and the sheer amount of layered textures on this record suggest he's got something special in the works for the future. There's wit and meticulous posturing in the hills: we'll be waiting right here for tomorrow. After all, there are enough immediately delectable grooves in his eleven tracks today.