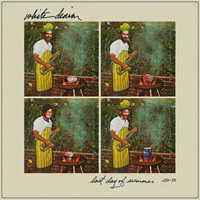 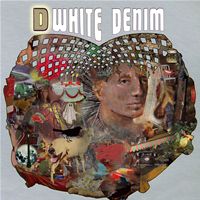 White Denim’s previous full-length (not counting last year’s internet freebie Last Days of Summer) was 2009’s Fits. An amusing chunk of eclecticism for eclecticism’s sake, it painted White Denim a restless, psychedelic power outfit as likely to play garage rock en Español as slap bass funk metal and hippie jazz. Seemingly unfocused on purpose, Fits (oh…now I get it!) was an enjoyable record, managing the feel of a classic Nuggets compilation while sacrificing coherency. Still, the Austin, TX trio possessed unquestionably awesome chops, especially in the angry hornet rhythm section of Josh Block and Steve Terebecki, the latter displaying a brawny dexterity on bass, splitting the difference between punk rock low end and the clunky lead antics of the Grateful Dead’s Phil Lesh: ridiculously high in the mix and eager to pummel the listener into submission.

With D, the chops remain, now enhanced by the addition of second, equally wonky guitarist Austin Jenkins. But White Denim have opted to reign in their genre hopping excesses in favor of filling that summertime, classic rock void, which’ll suffice until the next Howlin’ Rain record comes out (rumored to be this fall!). D is a ten-track, thirty-seven minute hybrid of the more fringe elements of the Woodstock Festival (e.g. Canned Heat, Mountain) and generous doses of prog-rock. Also: affable weirdness. These guys clearly appreciate Grand Funk Railroad’s “I’m Your Captain/Closer to Home” as much as Homer Simpson does, and for this we give thanks.

Speaking of fringe Woodstock elements, a few earlier evaluations of D have likened its sound to that of the Grateful Dead circa 1969-70. As someone who’s listened to the legendary “Dark Star” → “St. Stephen” → “The Eleven” run on Live/Dead (1969) more times than I’m entirely comfortable admitting, I say: eh, not so much. White Denim are more compact, less overtly out-to-lunch; not to mention they’re able to get through ten songs in the amount of time it took Jerry and the Boys to get through, say, two.

But White Denim do have more than a little in common with another patchouli-affiliated band known for mixing Woodstock grooves with ’70s Zappa prog virtuosity. Simply put, the latest incarnation of White Denim often sound a lot like Phish. And not in the sense where jaded indie kids notice some white dreadlocks and Cannabis at an Animal Collective or Yeasayer show. White Denim actually resemble the Vermont quartet sonically, mostly on account of their instrumental dexterity, which allows them to turn corners on a dime amidst heavily composed songs. You can hear this most clearly on “At the Farm,” a DNA-coil-tight, merry-go-round of a song with multiple peaks tailor-made for maximum hippie “woooo!”s at their live shows. It’s such a succinct distillation of Phish circa 1996 you’ll be having Clifford Ball flashbacks.

White Denim’s guitarists live for the squiggly lead melody riff, and if you’re feeling particularly vindictive, you can start tossing Blind Melon references around, though that would obscure what excellent songwriters these guys actually are. They’re as capable of dropping a hummable rock single like “Drugs” as they are multi-song suites, evidenced by “Burnished” flowing as smoothly into “At the Farm” as “Scarlet Begonias” did into “Fire on the Mountain” (Google that shit if you don’t know). “River to Consider” utilizes both Jethro Tull flute and an incomprehensible time signature, while the head-scratchingly complex second half of “Anvil Everything” can only be described as the inner workings of a grandfather clock diagrammed via bass and treble clefs.

A song or two treads a bit too close to “woe is me” white boy blooze (the skippable “Street Joy”), but D is generally an upbeat funhouse of a rock record—an album that will result in odd stares from passersby as the listener is forced to make involuntary “guitar face” on the street. And though they opted to work within a solitary, ’60s psych-rock spectrum this time out, White Denim remain unusually talented musicians for whom eclecticism is the rule, and expectation the harbinger of some totally bad vibes.