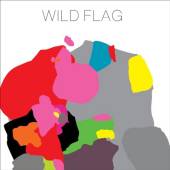 In a recent interview with The AV Club, Mary Timony of Wild Flag characterized the band’s debut record: “I began to realize almost every song was about returning, maybe having lost music and returning to it and making the decision, ‘I can’t leave it, and I love it, and it’s my life.’” Partner in crime Carrie Brownstein added, “We’re grappling with why and whether you can still find salvation in art, and whether it’s okay to, whether by now we should have found salvation in the white picket fence and kids.” It’s pretty clear on Wild Flag that they, along with bandmates Janet Weiss and Rebecca Cole, have found their salvation—in pure and simple rock ’n’ roll. It’s a debut, but also a comeback for a group of women whose careers have taken them in different directions over the years; it’s straightforward, electric, voracious, a document of a band relaxed and in their element: “I can’t leave it, and I love it, and it’s my life.”

Wild Flag is concise but jumpy, perhaps a party record in that sense. Timony and Brownstein share vocal duties, and while Brownstein’s songs are (unsurprisingly) edgier, Timony’s provide a nice balance—softer, sometimes more sprawling, but always of the same spirit. And what is that spirit, exactly? There are a lot of factors at play, from punk and garage to the slightest tinge of girl-group harmonizing, and it seems to be a truely inclusive effort, the band working overtime to sustain the record’s boundless energy and generally good vibes. The basic dynamic: Weiss lays the foundation, Brownstein and Timony bring the balls-out charisma (and killer guitar work), and Cole’s organ proves the surprising retro touch steering Wild Flag away from the most obvious of Sleater-Kinney sound-alike territory.

As Timony observed above, the main subject on Wild Flag’s collective mind seems to be a love of music: what it does for us, and why they can’t let it go. “Electric Band” is an obvious example of this, along with opening track “Romance,” which spells out all one needs to know right away, celebrating that certain bond being in a band creates. Brownstein sings, “The sound is what found us / Sound is the blood between me and you.” “Romance” kicks things off dazzlingly, especially when followed by one of Timony’s best contributions, the tense “Something Came Over Me,” a soaring, catchy number backed by choral “la“s. “Boom” is a dance-floor celebration courtesy of an off-the-charts vocal performance by Brownstein, whose “1, 2, 3, 4 / I like the way you move around the floor” abandons cliché through sheer conviction and longing. Some might say that women in their late thirties and early forties are too old for such club-scene sentiments, but the ladies in Wild Flag retort with an equally blunt fuck ’em all; this is what we do. It’s hard to argue.

The only songs on Wild Flag that seem to really break the dance-party mold are the psychedelic “Glass Tambourine,” a refreshingly chilly tune which meanders its way to the five-and-a-half-minute mark, and late-album highlight “Racehorse,” which eventually proves to be the ultimate Wild Flag song. Chock-full of late ’70s punk swagger, “Racehorse” begins with Brownstein alone on clipped vocals but builds to include the whole band and then some, the mess of people and limbs and attitudes sneering and shouting the refrain, “We’re in the money!” It’s Wild Flag’s best moment, simply showcasing how much these musicians enjoy working together and how well suited they are to one another.

In fact, the pleasures of Wild Flag all share this sort of fleeting nature—the songs aren’t terribly memorable, they won’t stop one suddenly in one’s tracks, but they succeed through a sense of unceasing joy and torrential personality. This is a record made by people who want to be doing exactly this—and it’s that rare kind of commitment that can only come from such elder statesman, transforming a pretty good record into pretty great reminder of why we should still be paying attention at all.