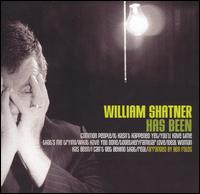 When Ben Folds Five disbanded in 2000, I truly cared. The Unauthorized Biography of Reinhold Messner (1999), horrifically underrated and half-brilliant, was the last gurgle of a band that promised so much and, looking back, disappointed so many. Ben’s first official solo outing, September 11th’s Rockin’ the Suburbs, maintained the songwriter’s acerbic wit and phoned-in appeal to the ennui of working-stiff-ishness, but wallowed so thoroughly through studio sheen and predictable everything that by the time 2003’s and, recently, August 2004’s internet-only EPs hit the, er, shelves, Ben Folds had become a caricature of his late-nineties, apple-cheeked self.

And he’s back, writing the music for, producing, and gathering guest stars to pepper William Shatner’s follow-up to Transformed Man (1968), the indulgent Has Been. It’s been a while, s’true, and Shatner’s voice has softened from the rigorous stage-actor pomp of Transformed into a fatherly lull, but the legendary cadence is omnipresent: “You’ll Have Time” spaces a dishevelled preacher’s epiphany with a simple organ chord progression, leaving little to the imagination when a choir completes the already unoriginal picture, but Bill’s timing is still impeccable. Only Shatner could hit lyrics like, “Live life! Live life, like you’re gonna die, because you’re gonna,” with such odd, imaginary punctuation that they come out sounding desperately poignant.

Leave the rest to Ben Folds. He factors so thoroughly into this album that Shatner’s presence could seem like that of a figurehead. Ben pens and performs the music, highlights including the wintry ballad of “It Hasn’t Happened Yet” or the solid Manitoba (wait, Caribou) electro-pastoralia of “Together.” He gathers the cameos, joining Aimee Mann in the mediocre heart-swill of “That’s Me Trying” or calling on Henry Rollins to spit and spasm through the hilarious “I Can’t Get Behind That.” Even more disheartening, in an early-October New York Times article, Shatner has already admitted to not knowing of Pulp (his cover of “Common People” a cheery, saucy reimagining of Jarvis Cocker’s viscid pop standard) and has wrongly referred to Nick Hornby, co-author of “That’s Me Trying,” as a famous playwright.

It’s true that Bill Shatner can write some deliciously tongue-in-cheek lines, but the heft of his wit rests in that regal, self-deprecating delivery. What made Transformed Man so enjoyably obnoxious was the swagger Shatner wrapped himself in when performing other artists’ material. Whether he was combusting in the blistering howl of “MR. TAMBOURINE MAN!!!” or saluting Shakespeare with heavy-handed monologues set against a full Dixieland band, he never winked or stepped back to clue the audience in on the joke. Was it even a joke? Here, with Has Been, it is, as songs like the The Good, the Bad, and the Ugly ode “Has Been” and the (worth mentioning again) hilarious “I Can’t Get Behind That” smack of shits and giggles.

So, despite somber interludes like the Shatner-only confession of his third wife’s death, “What Have You Done?” or the subtly rich “Together,” Has Been does little to rescue the Priceline spokesman from the novelty bin. I don’t expect much from Folds, who, even though he’s carrying the weight of two careers, still seems content with trucking out the same canned beats, squeaky A minor piano chords, and sloppy genre hopping. The disappointment is in Shatner, his feeble hold over the album manifesting in dopey lyrics and a rhythm all his own, which would be excusable if his presence hadn’t been so easily relegated to a name, a voice, and, in the case of “Familiar Love” or “Real,” painfully uninteresting lyrics. Sadly, Shatner, like producer Folds, is sidling into ironic chagrin. Here’s to hoping it doesn’t take another 36 years to figure out whether William Shatner truly embodies his titular claim. Because, well, he’ll be dead.