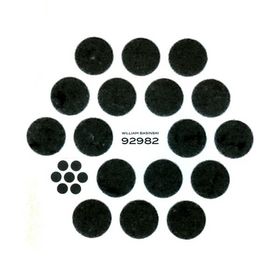 William Basinski’s The Disintegration Loops (2002), that four-hour epic, made most sense heard peripherally, secondary to whatever else held my attention at the time. What eventually grabbed me, made it so captivating, was how it was simultaneously dependent on its context—a meditation, as that album was, on the process of aging and death and the inability of technology to transcend the inevitable occurrence of decay—and entirely divorced from it. I’d always found myself admiring Basinski’s understanding of technological fallibility, the failure of modernism to extend man beyond intrinsic natural capacity, and the willing ignorance of our unavoidable death, but as my exposure to The Disintegration Loops became a more immediate absorption, all those heady conceptual conceits never got in the way of the fact that Basinski crafts some really beautiful ambient music, music that resonates with me so strongly less because it’s informed by some overarching idea than because it’s emotive on a much more fundamental level.

I’ve always found ambient music particularly conducive to passive listening; Brian Eno made it clear on a number of occasions that his ambient recordings were designed with background scoring in mind. But one convenient side-effect of ambient’s deliberate disengagement is the heightened likelihood of the music getting all wound up in the context in which it’s heard—The Disintegration Loops could change the way I experience a dreary late night bus ride in the rain, and that bus ride in the rain could change the way I experience The Disintegration Loops. When CMG’s Joel Elliott reviewed Tim Hecker’s sublime An Imaginary Country earlier this year, it was no surprise to me that he described his experience listening to the record on a train ride near Toronto. I’ve never had that experience with that record, but I totally get where he’s coming from: the thematic conceits at play there, centered around the reconciliation of natural beauty with industrial progress and development, resonated more strongly heard in that specific context at that specific time. It’s personal, but not entirely subjective, because those themes do, concretely, seem to inform the music itself, as do the themes of death and decay and the search for transcendence throughout Basinski’s career.

This new record is like many of his most recent albums, comprised primarily of ambient and noise loops produced and recorded in the ’80s (one track on the album is a re-recording of an earlier composition from the same era). Basinski’s continual return to older output—from a time he refers to as “fruitful”—colors his albums as nostalgic, romantic, and entirely antiquated, and the artist himself does little to disperse that aura that surrounds his process. The brief press copy for 92982, reinforcing the notion, eschews standard album description and buzz-building in favor of a detailed (and perhaps lofty) recounting of the circumstances in which the original recordings came to be: “Something from a long time ago…Brooklyn, 351 Jay Street…Home in my studio experimenting live…James is in the adjacent studio painting masterpieces [...] All the windows are open…The sound is spreading all over downtown Brooklyn mixing with helicopters, sirens, pot smoke and fireworks.” It’s a picture painted as bohemian, cool, anecdotal—it plays on the same passion for Nouvelle Vague cultural elitism as Jim Jarmusch films, Thurston Moore’s picture book on the No Wave scene, and Bob Dylan’s autobiography. It’s an alluring and irresistible image, and it sets the tone for how one might approach 92982; when the sound of thunder can be heard midway through the second track, one wonders whether this was something added intentionally by Basinski or simply the sounds of Brooklyn bleeding through to help unknowingly create a space for the listener.

Nostalgia’s a dangerous drug, but Basinski’s brand, a looking-back longingly at a hopeful time and place, is filled with acceptance as much as regret. So 92982 is an awfully sad album, one richer and more full-bodied than much of his previous work, and at its best it’s his most deeply and profoundly affecting. The album’s twenty-minute centerpiece, “92982.4,” is heartbreaking. A loop built on a sparse smattering of piano and a steadily growing ambient hum, it’s Basinski’s most focused and cohesive track since the first Disintegration loop, towering over the rest of the tracks as one of the best examples of Basinski’s unrivaled ability to pull drama from the repetition of atrophy.

I’d like to think The Disintegration Loops saw enormous critical success due in no small part to its thematic concerns, mostly because this is something that should come as no surprise to anyone’s who’s read anything critical about it. There will always be the ostensible hound to ambient music, that it offers the critical community, and by extension fans talking about it, very little to latch on to in an immediate and digestible way. That album and the contextual details swimming around it, from the 9/11 cover art to the story of its production (Basinski attempted to transfer analog tapes to his computer and inadvertently recorded their hour-long decay) make for a good read and an easy argument, where subsequent Basinski releases had less obvious narrative arcs or conspicuous “points.” For me, 92982 strikes a balance between what could have been either an overtly conceptual work or solely an aesthetic experience (though it’s difficult to label any ambient release “strictly” aesthetic, as one can extract meaning from the work however they please, natch, but few have a thesis as apparent as Basinski’s opus); there are things to be said about the sense of nostalgia and sadness which runs beneath this album, a combination of the extra-contextual knowledge that the recordings are 25 years old and were recorded in an arty Brooklyn apartment and whatever trace elements of that back story. But why 92982 most works is its competent craft; it’s a gorgeous piece of music, as willing as any recent pop confection to coat the parameters of your next grand emotional wake-up.