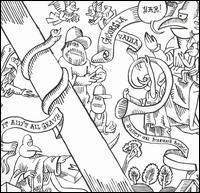 The implications buzzing around message boards and such that this collaboration breaks into unanticipated territory feels lazy and disingenuous. Jarel has already announced his fetish for squeals and blips through a handful of releases scattered between different aliases, carving out his niche comfortably between Dilla’s fledgling electronic flirtations and FlyLo’s expansive genre-melding, and while Khujo Goodie’s vein has never been that of a spaced-out MC, it’s not like he’s Trick Daddy. “U Want Some” possesses the same insistent directness of Killer Mike’s “Akshon” (a single in 2003, mind), and the album’s overarching approach of melding Southern sounds with the interstellar feel afforded by synths is the same motif of G-Side’s Starshipz and Rocketz (2008), which is, definitively, a stupidly enjoyable rap record.

Moving away from misplaced accusations of weirdness, this project feels disappointingly slight, clocking in at 46 minutes but containing only enough enjoyable material to fill an EP. Tracks like “The Grussle” and “Blast Off” bustle with a frantic enthusiasm that fails to permeate many of the spacey, pointless exercises that fill extended gaps between bangers. “Loner” plays like a rancid Gnarls Barkley C-side and “Violet Heart Box” stumbles along nauseatingly, blipping shrieks ambling over each other. One might initially be concerned that Khujo’s gruffness is a bit much to take over the course of a full-length, but it’s used here as a welcome respite from Jarel’s skittering annoyances.

In fact, a distinct lack of Khujo would seem to be Georgiavania‘s most immediate flaw. While I have qualms with the beats, which don’t feel as solidly composed as some of Jarel’s former work, there isn’t a time when Khujo isn’t enjoyable over them, his thick syllables and nimble insights dominating the full spectrum of Jarel beats, from the slight bounce of “Gawn Jet” to “Blast Off”‘s impenetrable thump. Jarel, conversely, falters over his own work; stupid lines and unworkable flows abound, too often falling into a pattern of half-crooned bullshit. Worse still, Jarel’s obligatory verse on each track truncates Khujo’s effectiveness, the latter unable to build on any particular theme, limited to spitting his sixteen bars and getting out of the way before he can assemble any genuine impact.

What’s so frustrating about this effort is its potential to be great, a possibility visible even through its painfully apparent flaws. An increasingly interstellar iteration of ATLiens (1996) would have been interesting to hear, but frequently tracks lean towards overly garish immediacy (“U Want Some”) or formless ooze (“Autopilot”). Georgiavania does yield five minutes of deliberate, churning brilliance in the form of album-closer “In the Red,” a slow-motion wobble of a beat built on lazily rising synths and a bleeding guitar. It’s steady, even as its subject matter (poverty) and Khujo’s ruminations unsettle, an irksome reminder of what could have been. And yet, I’m still strangely titillated. Should Jarel nix his desire to turn this collaboration (which could be a one-off for all we know) into some awful hybrid of that Cee-Lo/Dangermouse relationship, itself already a hybrid, a handful of tracks here present the path he could follow: the balls-out audacity of “The Grussle,” the gleeful ferocity of “Georgiavania,” and “In the Red” all serve as intriguing jumping off points for two artists with talents more formidable than this unwieldy effort suggests. Let’s hope stronger instincts prevail.