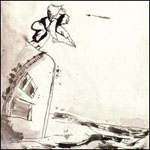 If the Ocean Gets Rough

Where have all the cowboys gone? It used to be that all a man had to do to achieve cultural resonance was to adopt the basic ideas of America’s founding myth: the rugged self-made individual. That’s artifice, of course, but as Ronald Reagan has taught us it’s the performer who can most deftly appropriate the traits of the idols of Americana that became, in turn, our heroes. Of course, even foundational myths are not so indelible as to withstand the imperative of the upgrade. Johnny Cash was the cowboy hard ass turned urban. Bruce Springsteen was the factory worker gone introspective. Bob Dylan took his individualism on the road, made it subversive. In each iteration these icons regenerate until they become new beings entirely.

That was us fast forwarding to 2007 where cowboys have gone the way of the dodo and folk singer Willy Mason releases his second LP, If the Ocean Gets Rough. The '00s -- as if it needs to be stated -- are not an era in which the two-dimensional titans of the past walk amongst us. Mason himself will tell you in his attempt at a haunting Nick Drake-style number, “Simple Town”: “the simple things aren’t so simple anymore.” Yet Mason seems determined to reside in the oversized tread of anachronism. On “Gotta Keep Walking” he is the beleaguered yet optimistic traveler. “Someone stole my boots in broad daylight / I put up no fight / when they were out of sight / I still felt alright.” No doubt there is meant to be some allegorical heft in these lyrics, but the amorphously rendered protagonist of this song is a run-of-the-mill hobo; not a downtrodden ideologue. These semi-marginalized, semi-self imposed loner archetypes suck like an undertow throughout If the Ocean Gets Rough.

“The World That I Wanted” centers around a boy-turned-man made hard by his father’s neglect and alcoholism. As if we’d never heard “A Boy Named Sue.” “Save Myself” fills the political activism quota while relating the story of a marginalized man awash in the uncertainty of, you know, whatever: “When you live in a country without history / one that buried its roots with its identity.” I could go on, as there is one of these “protagonists” in every single song, but I think you understand the kind of toothlessness I’m referring to here. Come to think of it, these may not be tough guys after all; maybe their “principled stands” wouldn’t have held water in any era.

There’s nothing inherently wrong with building an album on anachronism. My Morning Jacket’s It Still Moves (2003) lives, breathes, and kills on the energy of early-‘70s guitar rock, I regularly stun friends by revealing that Dan Auerbach is a white guy from Ohio, and Jack White has made a career out of aping intense blues simplicity. Good backward facing artists have a way of inhabiting their influences as they reinterpret them. Their deference to the original contextual impetus of the music from which they borrow is the irreducible core of any attempt to make it their own. But If the Ocean Gets Rough is bereft of this deference. Mason’s voice is too smooth and robust; it lacks even a trace of the requisite ache when he sings lines like “But he watched as the old man lay down in the earth / and he looked all around for a sign of his worth / and he cried, ‘Oh, daddy, what was it you wanted?” The squeaky clean production throughout the album mirrors this disingenuousness.

A vacuum packed bass riff ambles politely through album highlight “When the River Moves On.” Here Mason leads his backing choir through the swaying motions of a spiritual which is more enjoyable, if not more believable, than most of the fare on the album. In a way this song is emblematic of the record’s limited appeal: it’s actually pretty enjoyable if you’re not paying too much attention. And that banal generality of If the Ocean Gets Rough is what happens when an artist doesn’t bother to ground himself in the influences of which his work is obviously a product. The characters in these ballads are lazily-drawn American icons and -- even if they weren’t -- Mason hasn’t bothered (besides a few lame political allusions) to connect them with any modern day corollary with which his audience can identify. The resulting album isn’t so much an anachronism as it is an example of feckless nostalgia. Without making the new sound genuinely old or the old sound refreshingly new, Mason waffles in the flux between. So what era does this record belong in? None comes to mind.