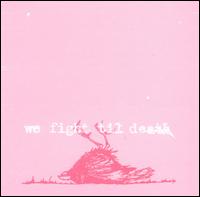 Windsor for the Derby

We Fight Till Death

Sometimes a new member can invigorate a band that’s either running on its own fumes or has tired out all the ideas in the toolbox and needs someone to put a new spin on things. Such was the case with the addition of wunderkind Jim O’Rourke to Sonic Youth, and, on a lesser scale, apparently the same thing has happened to Windsor for the Derby.

Because Windsor for the Derby has inherited more from new member Timothy White (I Love You But I’ve Chosen Darkness) than his old band’s penchant for pink and white cover art. Windsor’s somewhat droll and atmospheric space-rock sound benefits greatly from the angular, cutting guitar and new-wave/post-punk songwriting sensibility that White brings. It’s amazing what a little songwriting can bring to a post-rock band that likes to create sonic dreamscapes. I like a good sonic dreamscape and all that, but a little direction through that dreamy haze is always a good thing. Newcomer White may or may not have a lot to do with this, but the fact is We Fight Til Death features sprinklings of the frenetic tension that ILYBICD featured in spades on their 2003 self-titled debut. It’s this tension and moodiness combined with the spacey, pretty melodics Windsor has made their name on that make Death an interesting and worthwhile listen.

Sometimes, the repeating chiming guitars will be buried deep in the mix, haunting it like the ghost of new-wave past and sometimes they’ll jump out and flash you like a lonely old man in a trench coat. Opener “The Melody of a Fallen Tree” sounds like a deranged slow cousin to New Order. Make no mistake, this is still laid-back atmospheric rock, but with a hint of tension and added guitar interplay that can make it sound like a good Interpol song (remember those?) slowed way down. The singer sounds quite a bit like Califone’s lead singer, Tim Rutili, here. “Melody” segues seamlessly into “Cutter,” a track which I could imagine rocking a night club filled with grad students studying for final exams somewhere in the mid-West. The beginning to “Nightingale” samples the sound that happens when you open a door in the original Zelda (1986, Nintendo), and lurches into what sounds like a solid I Love You But I’ve Chosen Darkness song with a techno underbelly and absolutely wretched lyrics.

Had I heard “Black Coats” before hearing this album, I would’ve just excitedly thought it was a ILYBICD song, so close does it come to that band’s sound. But this is not a bad thing, and that has to be partly White’s contribution. It makes me wonder if I Love You But I’ve Chosen Darkness has broken up, but at the same time not mind too much if this band is going to feature White’s stylings. “Black Coats” is also delightfully abrupt, and in an album full of droning songs, it’s decidedly welcome.

“For People Unknown” sounds like a more spacey Joy Division. This is either blatant pandering to a market that can’t seem to get enough dance-anything at this point, or a hell of a dance song. About a minute into the song, you realize it’s mainly a hell of a slow building dance song. It’s odd to be mentioning dance-ability so often for a record that’s mainly atmospheric, but it is precisely so and perhaps that’s one of things that keeps me listening. Windsor utilizes angular repetition and mounting moodiness to build songscapes that eventually just make you want to dance, but with your hands in your pockets.

Frankly, this is an odd listen, it’s as if someone gave Low a pulse at points and then the next song will just meander away into the distance like a sad kite. Some of the songs just never find an idea that’s worth as much time as Windsor allots it. The production sparkles throughout, and on certain songs, it’s marvelous, but on others you wonder why exactly they spent so much time producing and so little editing the song down (“The Door Is Red” comes to mind).

In the end, that’s where Death fails. It needs an editor. So while the addition of Timothy White has made the band more diverse and added a new dimension to the Windsor sound, there’s still work to be done.