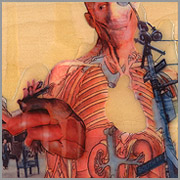 Wintersleep are mostly from Nova Scotia, Canada. Jud, the bassist, is from St. John’s, Newfoundland. He used to be in Buckettruck. Matt, Buckettruck’s lead singer, went on to VJ for Muchmusic. My friend Nicolle used to go out with him.

Wintersleep are better for her. Untitled is a very mature, developed, cared-for album.

So much so that, at points, you’d believe it if someone said that Untitled was done by Dave Matthews fronting a hard rock band, or Eddie Vedder picking up The Dismemberment Plan’s pieces. They seem like nice guys from what I know. Nicolle, stick with Wintersleep.

I asked CMG's resident rock authority Dave Goldstein: “Dave, why do I like this so much when I haven’t enjoyed anything by Pearl Jam since Ten, am forced to vomit when I hear DMB, and generally only dig arty hipster pop or hip hop?”

Dave said: “This album’s interesting; it seems to occupy some sort of no-man's land between mainstream rock sludge and, say, country-indie like My Morning Jacket or Magnolia Electric Co. Maybe like if Three Doors Down made a "difficult" record where they (successfully) "established themselves as artists" (Ouch....sorry if that was overly harsh).”

Dave – that was indeed overly harsh. But you have a point.

But then there’s that group-of-friends singalong of la-da-da-da-da-das that lasts for almost two minutes on “Migration." And it rides out an increasingly intense, celebratory, happy thrashabout. Light, melodic guitars etherealize it just enough to help it struggle out of heard-it-before “alt-rock” into alt-rock-based-art-rock. If this is grunge-by-numbers, Wintersleep use new numbers.

There are Beach-Boys harmonies. "Jaws of Life" is gorgeously complete: a small, one-line brush with vocoder and great, progressive percussion with fantastic clacking drumsticks and a COWBELL. More cowbell, please.

On “Jaws of Life," tight-stringed, pop-lite rhythmic strums are followed by Bends-ish plunges into hard-rock chords. An acoustic guitar plucks all alone, and then Mike Love’s approximated falsetto swoops in. This is a sunny, summer song featuring the lyric: “Oh my sagging skin, oh my burning sky, I will close my eyes… / O the jaws of life.”

The contrast accurately sums up what an anomaly Wintersleep are in the realm of internet-reviewed popular music: there is absolutely no smacking of trend-pandering here, and there is no current puddle of cool to pour them into. In ironic fact, it’s a bit of a jolt to be enjoying something that sounds so comfortable. And there has not been a more-enjoyed song than “Jaws” in my iPod this month, although I can’t help feeling that it would sound better on a walkman.

Nowhere on the record is Campbell more impressive than “Fog." He overcomes the hypnotic pop vocal melody and gorgeous accompanying harmonies to steal the song with easy, rapid hi-end hits, rolls, and a great interplay with the layered bass pulses. The song’s individual elements give up to the machine they propel, you find percussion in places you shouldn’t; Graceland’s Paul Simon could have arranged this if he composed using steam engines and clockwork. Actually, there has not been a more-enjoyed song in my iPod this month than “Fog." It, however, doesn’t really count because it’s only 97 seconds long.

And because no alt-rock record would be complete without ballads, we get those, too. For better, album closer “People Talk” sounds like Murphy recorded it by himself one night after the rest of the band had gone to bed (from the coordination displayed throughout the record, I’m making the assumption that all band members live in the same one-bedroom house, and have done so for roughly six years). It cuts off a second before it’s finished, punctuating Murphy’s ironic misfit mumbles about how people ceaselessly talk endlessly, but that he’s “afraid the world will die without a sound.” Hokey on paper, inexplicably great when murmured during a somber midnight recording session.

For worse there’s “Insomnia,” which has more pretty vocal harmonies, but Murphy strains and croaks his way through, and none of the players sound terribly excited about the faux-twang he sports on that tiresome “I prayed for life” line, which is drawn from an atypically colloquial pocket of lyrics.

A blog I visit quite regularly had a recent headline: “Wintersleep – the Next Arcade Fire!?!?!?” Wait now --- are we done with Bloc Party and Wolf Parade already? Wow. I (and Scott Herren, Colin Meloy, and Britt Daniel) realize that so far in 2005 it’s been quite easy to get tired of new albums before they’re even released. But please let’s let things develop on their own course, insofar as they might.

Wintersleep are no Arcade Fire. I think, on a bad day, Jud would be capable of eating Regina’s accordion and one or two fingers along with. I also think that in and amongst the rise and fall and rerise and fall and subsequent leveling of dance-punk, the purported g-funk revival, the middling '80s electroclash renaissance, the nouveau-disco movement, and any other shitty, hyphenophyte-born (ugh, look who’s talking) genre term, no one’s yet said “guys, let’s update solid alternative rock: no “indie”, no “dance”, just the really solid, mysterious alternative rock we all adored back when we wore Chucks just because they were cheap.” No one except this band.

Untitled is ten years too early to be retro, ten years too late to be trendy, but it’s my favourite of our No Big Hair records thus far. And while you might think I’m too young to be nostalgic, I have to say that I’m too old to care. The very idea of ignoring “the times” in favour of wholly-honest music is too seldom a “new” thing in itself.