1. Giants’ Graves
2. The Beatification of St Thomas Aquinas
3. Rapture of the Deep
4. The Best Free Show on Earth
5. A Crocodile Song
6. Smiert Spionem
7. No Flies On Me (Ballad of the Jam Head)
8. Sex Music (Beef on Wax)
9. The Puppeteer
10. De-Nihilism
11. You Already Know All There Is To Know About Time Travel (Just Look At The Stars) 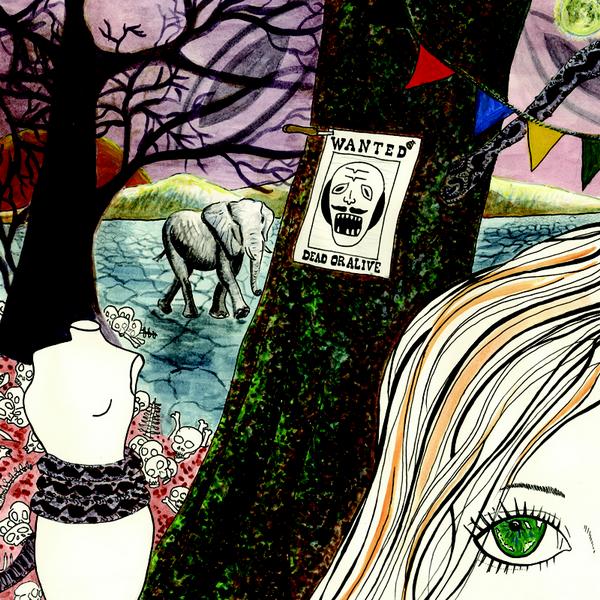 The Witch and the Robot

The Filth and the Fury, the Bishop and the Warlord, and now the Witch and the Robot: the latest in a series of deeply English pairings of apples, oranges and anarchy. Aiming to do for freak-folk what the Darkness did for poodle rock, the traditionally named trio of Venice Dustin Goodnite, Hen, and DJ Aesthetic Heartbreak emerge from the banks of the Lake District, presumably from between the two remaining boathouses not yet snapped up by the Yanks. It’s also safe to presume that a lot of great uncles’ gramophones have been changing hands in the Lakes, and that Ven, Hen, and DJ Sten(t) have been scrutinising their forefathers intently, eyes on stalks like kids in the woods who hide in the thicket to watch couples fuck. Not only is On Safari one of the more finely assorted records of this decade’s proto-folk movement—it’s also the one that could well attract fans as young as possibly thirty, carrying sufficient rock tinges to get the hippies all frisky and carnivorous. If you’re a fan of Pertwee-era Doctor Who or last year’s Angil+Hiddntracks LP, I think it’s fair to say this’ll be your cup of tea, this collection of often four-chord, frequently nine-pronged, bone-clicking, toe-warming forest fires. As a bonus, it even comes pre-ingrained with a sprinkling of British alternative culture—everything from lyrics built up of early Red Dwarf quotes to lyrics made from hundredweight nonsense (“Let’s go searching / For giants’ graves / Where d’you find them / The olden days”). That’s the opening track, by the way, a gypsy belly-dance with Bollywood and weathercocks and a chorus packing tribal harmonics. That’s the settling-in track.

Anyone whose fake occult hackles are already twitching can take a breath here; the Witches flip from grisly to humane as quickly as they do in the Roald Dahl book. For most of its 47 minutes, On Safari is no-holds-barred joviality, fur-trimmed Spinal Tap send-ups like “The Beatification of St. Thomas Aquinas” telling us “This whole thing is more mackerel than miracle.” The way these lines spill into “Rapture of the Deep” mirror the Witch/Robot’s own barmy rudder—they’re just as happy spooking you with spoken-word ghost stories (“Sex Music [Beef on Wax]”) as they are leading you into “‘Deep”‘s monsterless loch. “Sex Music” could well be their chief sheep/leader/touchstone, though: at eight minutes it’s practically a documentary, dipping from manic to gently soothing to Englishmen on acid screaming. Even if you’re hot for the Cumbrian dialect you’ll still feel a little on edge.

But then, that’s the hook with the Witch and the Robot—what die-hard meek folk snob doesn’t want to feel slightly on edge on a Friday? As things get groovy and escalate into brush fires, On Safari remains fully intentional, its own-grown bizarreness and spritely couplets written into every shake of the maracas. Remember the meticulous snippets of British culture mentioned earlier? How about a reference to the little-known, best Bond film hidden behind “Smiert Spionem”‘s Russian title like polonium hidden in sushi. The track itself might only be a cue that pays tribute to the Wicker Man (1973) piccolos, but it’s every bit as shapely as Britt Ekland’s backside, gentle as mist and calm as evil kids.

That’s where the Witch and the Robot get you—in mood, the mood you fall into when you’re faced with something halfway between unease and ridicule. The Celt bonfires and limbo routines have been done before and done better, but they’re never underpinned with the humour and funky ear that On Safari makes use of. If you never got to run wild in Tudor knot gardens or you fancy some alternative picnic music, you’ll enjoy a good half of this record, I promise. If you’re a multi-cardigan’d folk nut who refuses to abdicate from vinyl, then you shouldn’t be touching this album—the only thing you should touch is a pair of beard scissors and the button that says “Yes, I am over eighteen.”