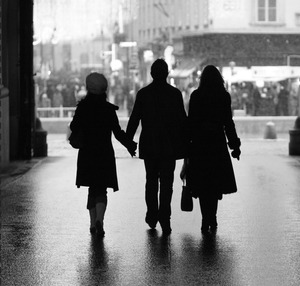 Worriedaboutsatan (you would be if you lived in Leeds) have that rare touch of being able to very accurately visualise a music scene: the carbonised techno and vinyl-only drone that emanates from cool, cold MCs. Mr. Claro Intelecto, Mr. Deepchord Presents Echospace, Mr. I Live In A City and Brew Beats for Nodding Night-Owls—pretty much anyone on the Modern Love roster with sleeves designed by Radu Prepeleac could put in for a percentage of Arrivals. Don’t get me wrong, there’s no skullduggery at work here, just a borrowed vibe of gloom and technology, of tape decks dissolving in concrete. Gavin Miller and Thom Ragsdale have cracked that “Island of No Return” theme that goes hand in hand with more experimental British releases, and their eleven-limbed debut sees them committing the formula to DAT, production courtesy of powerful microscopes. The only drawback, though, it that what you see all feels like a clip show, like someone pooling deleted scenes and creating a bootleg fan edit. This isn’t an outright duff technique—we all loved Kung Pow (2002), right?—but however hard I squint, I can’t see why it’s earning them such rabid reviews at the minute. Try as I might, Arrivals doesn’t hit me as anything more than a well-observed echo on all things post-millennial: doom, fog, vapours, etc.

There’s enough here to pique the familiar listener, though, and certainly enough to reel in any new kids to the queasy ambient scene. In particular, the beautiful standout of “You’re In My Thoughts,” where space-rock absorbs a molecule of percussion and morphs into IDM bliss, is bound to be a safe bet for crossover. It’s more outwardly anthemic than much else on the album and is no doubt bound to net the duo a national vector or two (apparently they’ve already had a track used in a prime-time soap opera). The more experimental frontiers get a look-in as well, with the scrambled “.” interludes clearing into a sinister countdown come their third cycle, and the atmospheric prelude of “One Down” prowling like cult slasher Dead Man’s Shoes (2004). Those percolating drones and scuba-dive dub teem throughout every minute of the record, making you long for those Orb LPs you wish would be given a repress. That’s right: the Emperor’s New Clothes are well spun but a replica, harking back to more accommodating times in the height of the ambient house era (MIA 1997).

Despite the prodding of déjà vu, Arrivals is just about a palatable enough affair; a minor stretch at sixty-two minutes but with enough peaks to be eaten in three sittings or so. The bleak echolocation and old-school Leftfield come straight from the early to mid-nineties, where long afternoons at Sam Goody would have you gambling your small change on this one. The pulsing smog, fronds of horror, and post-rock howls politely bubble around each other—their real agenda being to cross-pollinate white label cool with the retro-spook of Ghost Box there’s only so much clever recycling a person can take before s/he flakes and digs out originals. I won’t deny that those murky, anesthetized landscapes are perfect for people on sick leave—it’s just that, after all these years of biding their time and studying the fate of their predecessors, I’d have thought the next generation might have perfected a cure.