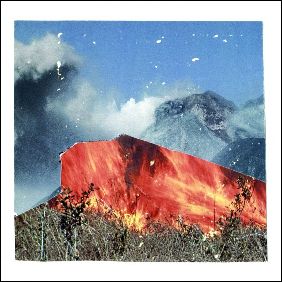 Go Tell Fire to the Mountain

The kids are so restless these days. How else to explain WU LYF, not a GZA/Rae side project, but a mysterious quartet of youngin’s from Manchester who seem to fashion themselves as some sort of feral street gang? Their name stands for “World Unite! Lucifer Youth Foundation!” and until recently, they shunned all manner of interviews, instead only leaking out masked, arty photos which had the unintended (?) consequence of making them look like a Clinic tribute band. This kind of calculated backstory, coupled with the musical heritage of their hometown, a locus making NME writers drool: it was ultimately unsurprising to learn they were managed by Warren Bramley, ad exec and apprentice of the late Tony Wilson, who no doubt would approve of the band’s ready-made legend.

WU LYF have tabloid appeal out the wazoo—but can they play? For the most part the answer is…sure. They specialize in a brand of echo-heavy (this Go Tell Fire to the Mountain, their debut album, was recorded in a church, after all) indie-rock, all chiming guitar leads and an unusually talented rhythm section with a sweet spot for tribal drum circles. Lots of mournful church organ to behold as well, and if you can somehow program your senses to block out the vocals, WU LYF’s best songs majestically conjure up Arcade Fire with the Edge on guitar, billowy, epic, insistent, pounding. No, they don’t lack for chops.

But every last review of this band devotes at least one paragraph to dissecting the vocals, and for the purpose of conclusivity we must also do so here. A quick perusal of WU LYF’s handsome website suggests their lyrics are written in English, but Ellery Roberts elects to sing them in something I guess I’ll call wolf-boy, not unlike Tom Waits in the last stages of emphysema. It can be often problematic, sometimes frankly grating, rendering anything resembling a vocal hook non-existent.

Which is the album’s most substantial problem: most of the time there just isn’t anything to grasp on to, and the band simply cannot subsist on their instrumental prowess alone. When you’ll struggle to remember anything aside from a singer who sounds like he entered the studio with food poisoning, that can’t make for eager, repeated listening. The first half of Go Tell Fire to the Mountain is scattered and especially difficult in this regard, though it’s redeemed somewhat by “We Bros,” an exuberant communal drum ditty characterized by unison chanting bridging the gap between Manchester United lager louts and Lord of the Flies campfire ritual. You’ll eventually find yourself singing and clapping along, even though you won’t understand the lyrics. It’s like what happens whenever Metallica or Depeche Mode play South America.

When WU LYF are at their best, the results can be thrilling. Take first single “Dirt,” a tension-filled pile-up of cavernous drum blasts, mournful organ, and clattering percussive sticks that really do sound the like riot-laden end times depicted in its agitprop video. Of course, it also helps that said video displays every lyric as sung, “Fall On Me”-style, so you’re not completely in the dark as to what’s transpiring. And each of the three songs after “Dirt” build to such climaxes that one can’t help but be impressed by these kids’ musical acumen.

Their live show looks pretty killer on YouTube, and “Dirt” gets more than its fair share of “wooooos” when I inevitably drop it in every Turntable.fm room. But—I’m not completely sold on these guys yet. If listeners are ultimately going to need something more than grunts and moans to tether them to each song amidst the instrumental bravado, Go Tell Fire to the Mountain, and WU LYF in general, are a band handicapped, seeming less like an actual group and more of an experiment. In what? In determining how much vocal pain listeners are willing to endure if the underlying music is actually pretty good. Together, perhaps we can rebuild.