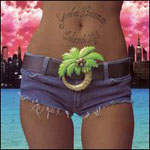 Here at CMG we get all sorts of interesting mail. It’s mostly outraged fans or angry Anticon members that write, but every once and awhile we get the note either thanking us or, and these are really the best, asking us for musical advice. It’s fun to actually be asked for the RIYL suggestions that we normally try to steer away from, and we can occasionally give a good response. Lately, it seems as though a frequent question comes in the general form of, “I woke up this morning and realized that I really, really don’t like James Murphy and never want to hear another overly ironic cowbell solo again in my life. So, what should I dance to?”

To you, my friend, I have only two words: Yerba Buena.

It’s a name most people should already know, but their fantastic debut record President Alien went under the radar back in 2003, and so they are left to prove themselves again with Island Life. Yerba Buena really got started in 2002, when band leader Andres Levin was working on the Fela Kuti tribute compilation Red Hot + Riot, still one of the best compilations I’ve ever heard. President Alien was nothing short of blazingly hot, mixing rap, Latin beats, and a 20th century New York boogaloo mentality that looked to be the best thing for Latin music since Orishas dropped A Lo Cubano.

Critical response was decidedly limited (okay, with the exception of a Grammy nomination), so Island Life marks their second try, and while it doesn’t manage to match President Alien, it does come awfully close. Perhaps even more importantly, it keeps the band moving forward, focusing even more toward the hip-hop that they do best while still keeping track of their musical heritage. Or, more simply: it’s just one huge, funky dance party coming at you straight from the heart of Spanish Harlem.

There are a few songs here strong enough that even someone in the deepest, darkest DFA rut is sure to be revived by the true groove. “Bilingual Girl” doesn’t even bother with being sexually suggestive, preferring to just come out and say it. M1 bounces along on the beautiful “Fever,” and the band seems to be aiming for some sort of land speed record on the club-bound “Belly Dancer.” “Bla Bla Bla” is one of the better political tracks I’ve heard in a while, and certainly the most danceable.

Two of the best tracks here get well-deserved second takes. “El Burrito” moves toward a gypsy vibe with rumba singer Peret taking over vocal duties. Even with the unnecessary John Leguizamo intro, “Sugar Daddy” is hard to deny, and while the Whitelion raggaeton remix hidden at the end of the disc is no “Gasolina,” it does manage to play well on the original.

For those with a good knowledge of the history of boogaloo and Latin music in general, Island Life manages to present an impressively wide array of guests. Everyone from the contemporary (Les Nubians, Orishas, M1) to the more obscure (the fantastic Diego El Cigala, Rosi de Palma, Peret, Joe Baatan) show up here, and they manage to feel more like extensions of the band than awkward intruders. Orishas’ afro-cuban beats work well with Yerba Buena, making “La Candela (Prendala)” one of the hotter rap tracks here (check that piano line at right about the one-minute mark for the definition of cool). Likewise, Diego El Cigala on “Corazon Bandolero” makes you wonder when Ry Cooder will get his act together and start looking for aging flamenco singers to make famous.

At 73 minutes, Island Life does run a bit long, and though the skits never go overboard, they also don’t feel terribly necessary. There are also a few songs that mesh a bit too much; too many pistons firing at once, and it becomes hard to keep the tracks separate. Still, I feel like I’m picking at the little stuff here. This has the feel of an album you throw on when the sun is out, and you just want to sit and listen to summer in the big city. It’s overflowing with sex, funk, and all the other good things that make Latin music oh so right on a hot day.