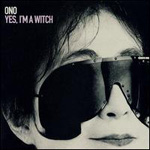 There’s no denying it—part riposte to being arguably the most vilified woman in the public eye for being responsible for the break-up of the Beatles and part admission to the alchemy of disparate ingredients at work on the album, Yes, I’m A Witch is a fantastic title.

Yoko Ono—and truly there are no two better words to divide music fans—has unduly suffered more than most: despite being revered in vanguard art and music circles (having collaborated with John Cage and Ornette Coleman, including a performance at Carnegie Recital Hall in 1961) she is still best known as John Lennon’s widow. Because of this her music has rarely been given due attention, which is strange since, of all the Beatles-related recorded output, Ono has released the most musically adventurous albums. She even struck solid gold twice. Fans of Can and noise rock may want to dig out the equally cerebral, motorik, and lunatic Fly (1971), and those who like souls bared to the point of bloodshed will be hard pressed to find something as visceral and raw as Season Of Glass (1981). Oh, and if you think Alex Chilton’s “Holocaust” is a work of haunting brilliance, it is, but it’s also a sloppily disguised reworking of Ono’s “Mrs. Lennon.” Thankfully, not everyone was ignoring her. New wave and punk acts such as the B52s, Lene Lovich, and Patti Smith could hear behind what most thought were atonal improvisations and even Sonic Youth recognised her influence in their tribute to musical innovators, 1999’s SYR4: Goodbye 20th Century.

Yes, I’m A Witch is equally tribute album, an album of collaborations, a remix album, and a greatest hits album. Her back catalogue was given to a strange brew of musicians. Artists as diverse as Cat Power, Jason Pierce of Spiritualized, the Flaming Lips, Le Tigre, Polyphonic Spree, Antony & the Jonsons, Apples in Stereo, Peaches, and Public Enemy producer Hank Shocklee crafted new ideas around Ono’s compositions. The results, both individually and as a whole, are a testament to Ono’s distinctive ear for melody, lyrical honesty, and, as possibly shown within the respect the songs were treated, her recent transition to Second Most Hated Ex-Beatle Wife after porn star-turned-cartoon villain Heather Mills.

Hank Shocklee opens proceedings with a bang, weaving a nervy techno surge under Yoko’s quivering vocal and confrontational lyrics, “Yes I’m a witch, and a bitch, I don’t care what they say.” It barely has time to settle in before Peaches’ take on “Kiss Kiss Kiss” matches the originals sing-song verses and Ono’s unique guttural wails against Neptunes-style future R’n’B. Elsewhere, Shitake Monkey matches the charming and lilting “O’Oh” against samples and hip hop beats, Le Tigre turn the agit-pop “Sisters O Sisters” into a speaker troubling bass-thumping anthem (Yoko’s voice sounding like Kathleen Henna in places), and DJ Spooky churns “Rising” with his trademark dub-heavy trip hop beats while mangling Ono’s vocals beyond recognition to the point where at times they sound like clavinets or a snake charmer’s pungi. But, even though the dance tracks have been mostly sequenced together, Yes, I’m A Witch is more than a remix album. The party is interrupted by the plaintive acoustic treatment of “Death of Samantha” by English prog-band Porcupine Tree. It’s stark arrangement, weighty with autumnal sobriety that frames Ono’s poignant lyrics, “When I’m with friends, I thank God I can light a cigarette when I’m choking inside.”

Equally fraught is Jason Pierce’s treatment of Yoko’s only true hit, “Walking On Thin Ice.” Written shortly before Lennon was shot, he died with a copy of the rough mix in his hands. Originally a new wave-inflected dance song, here Ono’s lyrics about jealousy, remorse, and guilt are set against a pummelling and scraping electric guitar, Spector-esque kick drums and tambourines, and a reed organ. In this reworking, when she breaks into tears, she sounds more sincere than against the erringly jaunty original. Always on hand to tip the desolate listener over the edge, Antony Hegarty’s take of the elegiac “Toyboat” (from 1981’s pain-wracked Season of Glass) is easily the most beautiful song on the album. With heavy reverb and a woozy violin, the blip and glitch electronic beats, the song could be Björk’s.

Not all of the collaborations are as inspired or successful. Cat Power phones in her piano playing on their duet “Revelations.” The Flaming Lips, disappointingly making the least with the source material, knock off a “V2 Schneider” soundalike acid-rock freak out for “Cambridge 1969/2007.”

The biggest surprise is the Polyphonic Spree who disappointed this year, farting out the flabby and shambolic The Fragile Army. Ironically, their take on the obscure “You And I” from Ono’s awful 1985 world music mess Starpeace is the most Beatlesque song they’ve recorded since “Soldier Girl.” It drips with charm. Driven by a minimal banjo backbeat, walking bass, brushed drums, and a piercing flute Yoko’s nursery rhyme lyrics sound positive and life-affirming: “It’s you and I, feeling good / Watching the sky turn to sunrise pink / The stars are fading, saying good night / Throwing us a big fat wink.” In true Spree fashion the song soon explodes into orchestra led choir piece with trumpet flares and “Penny Lane” flourishes. Damn it, it’s practically triumphant.

I don’t really know who this album would be best suited to. It could provide a way into to Ono’s sketchy but occasionally astounding back catalogue, although I would hazard few would take that gambit. Ono fans would buy this to hear the reinventions of some of her classic songs but may be disappointed at how far they’ve been taken. Ultimately, I think we should ignore the traditional role of the traditional tribute, remix, or greatest hits albums and see this as a celebration of a woman who is finally being seen the way she was seen through Lennon’s eyes: a multi-talented songwriter and recording artist.