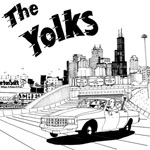 One of the more interesting musical developments of the latter part of the decade has been the resurgence of garage rock. Enabled by cheap equipment, and perhaps inspired by “Losing My Edge” to download a Sonics album, young bands have been blowing out speakers in live shows across the country and entertaining blackout drunk crowds at festivals like Gonerfest. The most polished of these groups might be Chicago’s the Yolks, whose output (an EP last year, this LP) has most of the hallmarks of the neo-garage scene—limited analog-only releases, muddy production, obvious retro sensibilities, a tendency toward simplicity. But underneath the superficial primitiveness are subtle hints that the Yolks aren’t just another revival act: Aaron Stringer’s drumming is complex and insistent; Nathan Johnson’s vocal lines float easily on top of the pitch, wailing like they emanate from a seventh guitar string; and, while the vocals and guitars fight through thick layers of distortion, the bass playing of Johnson’s brother Spencer is always melodically and rhythmically compelling. “Jane” is driven not by the simple vocals or the guitars but by the bass line, which meanders high and low while the other elements repeat themselves for measures at a time.

If the performances betray the Yolks as a higher order of garage rockers, so does the songwriting. The most surprising aspect of the record is the diversity of rhythm and sound, which ranges from angular uptempo punk (“Hey Child”) to slow country and western blues (“Rambling”). “I Do What I Do” stays in a 4/4 rock framework but has a backing track of metronomic guitar and syncopated bass that sounds almost contrapuntal when featured against the vocal line. There’s a “Misirlou” guitar solo, Booker T. organ jam, and “Subterranean Homesick Blues” rap on “Sir Charles,” Nuggets spartanism and a psychedelic organ line on “Fade Away,” and Ramones backing vocals on “Wandering.” The two best tracks, “Long Cold Lonely Night” and “My Love Is Yours (My Money’s Mine),” are quick foot-tappers with chunky I-IV-V chords and lyrics about sex and money. This is a disparate collection of tracks and fresh ideas, not a repetitive parade of head-bangers.

Now is the future of rock music in ‘60s garage revival? Surely not. If indie music sees a movement away from epicness and toward rootsiness, it will probably be in the form of grunge revival sparked by a few serendipitous spins of Nirvana’s Live at Reading. And on occasion, one would be forgiven for suspecting that the Yolks have intentionally dumbed themselves down or that the band that doesn’t fully buy into its own shtick. It’s probably safe to assume that they haven’t and they do, but the only way to figure that out will be to watch what Stringer and the Johnsons do the next time around, if there is a next time. In the meantime, we should simply enjoy the tautness and movement of an awesome piece of guitar rock.