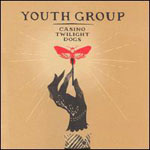 Mainstream success, especially in the music business, always involves compromise. This is essentially the point of Dreamgirls, this season’s blockbuster film, in which Curtis Taylor, Jr. (played by Jamie Foxx) “whitens” his black artists in order to have them “cross over” into the world of pop stardom. For Beyonce and the Dreamettes this means ditching the outspoken and overweight Effie (played brilliantly by Jennifer Hudson) and for James “Thunder” Early (Eddie Murphy) it means turning his raunchy soul performances into restrained lounge acts. The theme here is racial inequality (one scene depicting the Detroit race riots is provocative, if forced), but I wonder if these ideas of compromise aren’t also useful for criticizing shameless grabs for Adult Album Alternative radio play such as Youth Group’s latest, Casino Twilight Dogs.

Casino Twilight Dogs is the perfect example of the type of album that I have come to fear since I started reviewing music for the Glow. For fact, at least one of these songs will end up on a mix I make for a girl (perhaps my friend Liz, who I used to go to youth group with) even though I would never recommend this “album” to anyone who I know listens to music as frequently (and critically) as I. Dogs already charted in Australia when it was released there in July, and it will certainly garner the modest success and credibility offered by David Dye and the World Café when it comes out stateside later this month. Yet, this Youth Group record is a diluted version of already watered-down music; not only is it not as good as their first album, I’m not sure it’s as good as Keane’s first album.

I don’t want to re-open the Great Indie Sellout Debate, but I do want to say that this album is bad precisely because it is watered-down, radio-friendly, crass, overproduced schlock. It would not be difficult or inappropriate to call the album “derivative” or “uninspired” or “boring,” but those critiques of artistry ignore the shameless commercialism that seems at its core. (Anti records, home of the staunchly anti-commercial Tom Waits, quotes an Australian radio station that predicts “mainstream success” on their official page for the album.) This is their stab, however modestly, of Dreamgirls stardom, and while at times it is sweet and shiny it is also empty of any of the inventiveness, excitement, and energy that make for good rock and roll. When we shorten independent to indie we often run the risk of reducing something still meaningful to something that is merely marketable, and, dare I repeat, Casino Twilight Dogs is extremely marketable.

Its marketing genius comes from the way that Youth Group has so successfully incorporated the work and sound of other bands into its music, sometimes literally. The drums for opener “Catching & Killing” came from Stone Roses and Arab Stap records that new guitarist Cameron Emerson-Elliott looped together. The song itself sounds, alternately, very much like Interpol and very much like Snow Patrol. The lyrics, according to Emerson-Elliott, “ended up as a drunken free-form rant in the studio”—a vaguely “rock and roll!” admission that does nothing to sharpen the song’s appeal.

“On a String” is a straightforward and sentimental slow-jam that reveals Youth Group’s penchant for writing pretty great melodies surrounded by painfully predictable arrangements. Mirroring the music, the lyrics feign inventiveness while boring utterly: “Love’s such a creepy thing / It gets under your skin.” Right. Next track “Let it Go” is nothing you haven’t already heard on a Travis record, and “Start Today Tomorrow” manages to combine David Gray’s “Babylon” with Radiohead’s “High and Dry” with completely benign results. The song echoes the sentiment that I feel when listening to it: “I’ve been so damn sure / that I’ve been here before.”

As a band content to tread the paths of bands before them, it is no surprise that they are at their best when playing another band’s song. Album closer “Forever Young” was originally performed by Alphaville from their debut 1984 album of the same name. That band was largely derivative of Roxy Music, especially in the vocal performance of Marian Gold; that another largely derivative band would cover it seems both hilarious and appropriate, but this irony is lost on the band. Youth Group give it an earnest treatment, replacing the electronics of the original with guitars that start cleanly picked only to descend into a noisy breakdown toward the song’s end. Seemingly striving for reinterpretation and seriousness that have marked most 80’s covers (the most successful being Gary Jules’ “Mad World”), they succeed more in making a novelty single. Which, I suppose, is what the song has always been.

First recorded specifically for The O.C., “Forever Young” is a paean to the pleasures of pop music and good old-fashioned selling-out. It’s a good song; it topped the charts in their native Australia, sold something like a million records, and landed them a gig opening for Coldplay. I enjoy it; and soon you will too in your neighborhood Starbucks, on your local AAA radio station, and in several commercials. This is exactly what this song was supposed to do from the moment it was conceived. If that’s okay with you, then you must have really, really hated this review.