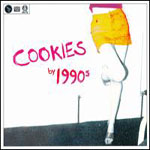 Most of the blog hype surrounding 1990s centers on the fact that frontman Jackie McKeown used to head Glasgow trio The Yummy Fur, which I guess at one time featured two members of Franz Ferdinand. Until recently, the only time I had ever heard the phrase “Yummy Fur” was over ten years ago when Michael Stipe saw them at an Australian rock festival and talked them up on MTV. I was a little surprised to learn that they weren’t from down under.

So while I have no idea what McKeown used to sound like, Cookies leads me to believe that the man likes to err on the sex, drugs, and rock and roll side of things. Consisting of twelve mostly mindless bursts of amusingly skuzzy glam-pop, it’s one of the better party records I’ve heard in awhile, purposely short on depth, but rife with attitude.

“You Made Me Like It” kicks off with a riff similar to the opening blast of The Romantics “What I Like About You,” and the template for the rest of the album is firmly in place. McKeown appears to fancy himself as a bit of a louche Cassanova, with a vocal style splitting the difference between Marc Bolan and Richard Hell. And like Eddie Murphy’s girl, McKeown has minimal desire to do anything other than party all the time. A disproportionate amount of these songs celebrate the protagonist’s ability to enjoy himself via drug intake and/or women over vintage ’70s New York punk riffs, and McKeown risks coming off as an obnoxious poseur. But what separates him from, say, the Dandy Warhols’ Courtney Taylor, is that he’s completely into it, man, and has a relentless bag of hooks to back up his swagger.

“Cult Status” (pronounced “stay-tus,” natch) is such an appealing hybrid of ’70s sparkle with ’60s Stones that a head slapper like “my cult status keeps me fucking your wife!” feels like a statement of unavoidable logic as opposed to the usual idle boast. “See You at The Lights” is less X-rated, but similarly appealing, with a great “ba-ba-ba” vocal hook and McKeown’s urging for his girl to “put on that dress tonight.the one your mom don’t like” while hitting up a bar “like a blonde gets out of a car.” Can you dig it?

Most of Cookies proceeds in similar fashion, with crunchy, showy riffs supporting clever hooks in the name of two-and-a-half minute pop nuggets that the late John Peel would have likely appreciated. The mold dissipates somewhat towards the end with the melancholy paranoia of “Weed” (as in “I’ve been smoking too much” and now I’m edgy), and the Far East-tinged krautrock of “Situation,” which runs over five minutes, and features McKeown’s take on a Robby Krieger guitar solo. It serves as a fitting come down to a hell of a party, not to mention one of the summer’s most pleasant surprises.