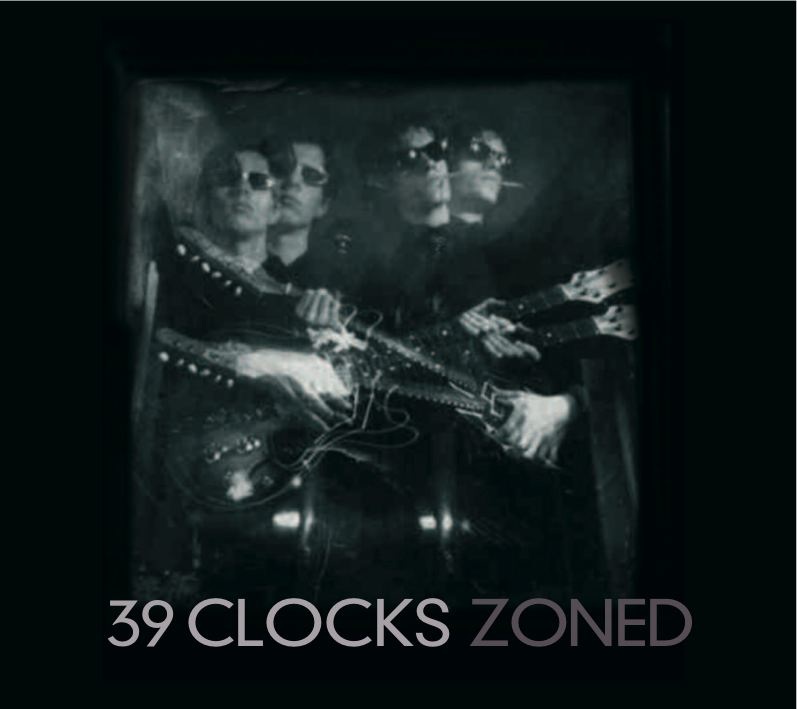 Here’s a familiar scenario: subculture is born of a few people legitimately interested in art, and many who are more interested in fame; subculture merges with the mainstream and this subculture hybrid, in the blink of an eye, births a desolate wasteland of elitism, masturbatory by its very need to be celebratory about how the (now-)hollow subculture was able to make such a merge in the first place, or, in some cases, resist such a merge while gaining comparable popularity; subculture demands someone take the piss out of it and preferably look cool while doing so.

Since we’re still waiting for that fuck-off savior of prankster sincerity here in the new millennium [Does Ween count?—Ed.], take Zoned, a compilation of material from Germany’s 39 Clocks and an interesting if somewhat aging blueprint for how to look cool and poke fun at the self-important vanguard in the meantime. Picture pioneering synth-punks Suicide with a dash of the absurdity, the atonal bombs of the Residents, and the cold-as-ice imagery of Spacemen 3; the double-exposed cover photo for Zoned shows members Christian Henjes and Juergen Gleue in blue, holding guitars and brandishing shades, which should only back-up my previous comparisons. Emerging in the late 70s, the duo managed the admirable feat of being ejected from Vienna Aktionist Otto Mühl’s communal art space, and given Mühl’s infamy for designing pieces that liberally incorporated live nudes covered in human feces and vomit, the imagination stymies at how this could have possibly happened.

Ostensibly, 39 Clocks owed a heavy debt to the Velvet Underground, employing similar minimalist rock rhythms, but, radically unlike VU, the Clocks never sound like they’re taking themselves all that seriously. It’s a blessing and a curse: many tracks are bolstered by timbral clashes of marching stomps or free jazz ephemera thrown haphazardly at the mix, but, then again, a decent number of these cuts sound like the result of a dickheaded amateur night via obtuse recording qualities, off-key singing, and the needling, overt fact that Henjes and Gleue regularly slip up keeping in step with the rhythm of their drum machine. Whether or not this is intentional, this flawed existence forms the cracks that inform listeners just how badass Zoned is and just how Jesus and Mary Chain it isn’t. All in all, what this compilation presents is 39 Clocks as the bastards from the ashes of an avant-garde fringe that was in danger of forgetting how silly it was, even as it burned, even as the bastards tried to set it on fire.

All of this discussion of aesthetics and rebellion isn’t to say that 39 Clocks are an inchoate mess of contradiction—far from it. “Past Tense Hope and Instant Fears on 42nd Street,” for example, is a revving slide of organ- and guitar-driven, Nuggets-friendly psych rock. Once again, there’s that profoundly amateur sound, but in this case, it’s an asset, the Clocks cobbling together an excellent soundscape for the temporal curlicues of too-late nights and, well, zoned-out morning-afters, replete with bursts of noise and meandering guitar solos. It’s like VU’s “I Heard Her Call My Name” if Lou Reed didn’t sound so insistent on actually having anyone pay direct attention to him. “DNS,” meanwhile, is the best point of Suicide comparison Suicide never got even close to with some extra slop by means of a frustratingly imperfect electric bass line. In the right kind of subversive rock mindset it’s all easy to groove to.

“Fast Cars,” one of the comp’s clear highlights, begins with nearly a minute of its main progression sped up and messed about on tape; by the time the quieter and slower song, in true colors, comes in, it’s a comedown from absurdity into limned intensity. It’s a brilliant move and serves to dictate a method the compilation exploits hardily throughout, like sequencing something as catchy as “Fast Cars” next to a less accessible, more befuddled piece like “You Can’t Count The Bombs (It’s Zero).” It’s also proof that 39 Clocks could have made something for the radio—or, at least, a little something for everybody—if only they gave a shit, reason enough to make the effort (re)discovering a band that probably preferred obscurity.