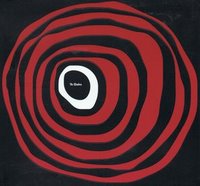 While I love to revel in restrained free improv like that of AMM, every now and then I need a generous kick in the ass to remind me that free music still has the potential to be an entirely visceral experience. And sure, the biggest complaint about this kind of music is that the players are just blasting away without concern for what each other are doing, but if one of the major tenets of free improvisation is to abolish the typical jazz tendency to privilege individual performances over group dynamics then 7k Oaks have nailed it. The quartet almost entirely does away with solos in favor of collective bursts of energy and claustrophobic tension; their emphasis on overall tone over virtuosity recalls the jazzier side of the Rune Grammofon lineup. And yet while much of that label’s catalog feels like the work of general artists experimenting with non-standard instrumentation and electronics, 7000 Oaks feels like the work of masters of their instruments completely deconstructing the form.

If 7k Oaks did have a leader, it would probably be Alfred 23 Harth, a multi-disciplinary artist who started his career in the ’60s writing about synaesthetics. He throws saxophone, clarinet, and alternately murky and high-pitched electronics all over this beast. The other three musicians are equally adept at working unconventional sounds into their fierce playing. Pianist Luca Venitucci (who also plays accordion and random objects) has a style that’s half-Cecil Taylor and half-minimalism, alternating percussive pounding and rhythmic pulses that flutter around the same few notes. Massimo Pupillo makes his bass sound like a sludgy distorted guitar, while drummer Fabrizio Spera rattles and scrapes as much as he hammers.

The opening “Church of Neutral” is as powerful an introduction as you can get. Most sax players as far into free territory as Harth usually opt for the Ayler/Brötzmann formula of accenting their playing with a heavy dose of squeals and playing outside of the usual register (which Harth definitely excels at elsewhere). Instead, Harth resembles nobody if not Coltrane: his lines are clean, slow, and confident, unbounded by tempo or scales. Spera accents this fanfare with furious tom-rolls while Venitucci plays huge chords that bound across the entire keyboard in seconds. Pupillo’s contributions become more noticeable at the start of “Foxp2”; he cuts his fingers across the high-end of his bass with dissonant squalls while the band works in spurts, starting and stopping on a dime. While “Church of Neutral” is lyrical, on “Foxp2” everyone seems to be playing percussion—even the saxophone, in a way I don’t think I’m qualified to explain. While the initial portion has no specified rhythm, at about seven minutes in the guitar shifts into a taut osscillation between two high notes that establishes a groove while the piano and sax take turns weaving simple, single-chord patterns while the other goes off.

Every time it seems that a musician will take the spotlight, the band throws a sonic curveball into the mix: for example, the sax at the beginning of “Pi Too” would obliterate everything in its path were it not for the buzzy prepared piano that tinkles underneath it like an ironic commentator standing by the scene of disaster. In a similar vein, the band also thwarts any descent into a simple pattern or melody: witness the klezmer-like swing of the accordion on “The Invisible Tower” which firsts gets smeared over by slippery sax-playing and then fades into the background as the drums rocket the track into lightning-quick rhythmic irregularities that make the whole thing seem more like avant-prog than anything remotely jazz.

But the 20-minute centerpiece “Strategy of Tension” is the best argument that the band goes legions beyond simple noise-making: the majority of the track is a dank sound collage where it’s nearly impossible to tell where the sounds are coming from. It’s one thing to render instruments completely unrecognizable; it’s quite another to make something completely abstract that, for the most part, simply relies on the basic properties of the instrument. In the beginning it’s all tinkles, scrapes, puffs of air through woodwinds, and low-end electronic hums. But even here, the same impulse that characterizes the band’s full-blown attack seems to direct the sound, which has the character of something deafeningly loud but far away. And rather than just build it up into a blowout straightaway they opt for a more oblique route, descending into dementia rather than giving in to climax. Around halfway through, the track develops into something that’s either really high-pitched clarinet or squealing electronics but sounds like a mosquito buzzing in and out of your ear, along with long accordion drones, low creaking electronics, and an organ that occasionally spirals into odd backwards carnival melodies. The amount of depth and humor in this music is stunning; it’s like some bizarre fun house version of a Pauline Oliveros composition. When the drums kick in and the track goes berserk, it’s well-earned. If this sound was your mind, you’d go berserk too.