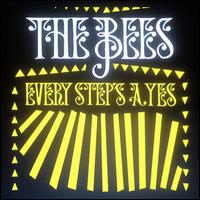 A Band of Bees

Every Step's a Yes

UK-born psych popsters the Bees—or A Band of Bees, as they’re known in America due to copyright issues—have had an interesting, if objectively dwindling, career trajectory. Their debut album Sunshine Hit Me (2002), a palatable meld of lo-fi reggae, angelic harmonies, and enduringly sloppy retro instincts, was a genuine leftfield hit, not only earning the group countless “buzz band” puns from critics, but also scoring a Mercury Prize nomination and securing major-label release for a well-anticipated follow-up. That effort, Free the Bees (2004), was a better, fuller record, but it brought the Bees into the damning state of praise by proxy: suddenly they were the Faces reincarnated, the English embodiment of the Stax sound, or Donovan fronting the Kinks. Their sense of self, shrouded in these myriad nostalgic mad-libs, was effectively compromised. 2007’s Octopus was thus quietly received and stylistically tired, and now Every Step’s a Yes—which didn’t see its limited light on American shelves until a full year after its UK release—arrives unadorned by much in the way of excitement. For a band that so thrillingly championed the unexpected in its early days, expectations have never been so low.

What Every Step establishes most ostensibly is that the Bees have taken their sound-alike sensibilities deep into obscurity. Their influences on this set are harder to spot, and their mixes between them less obvious—but this is still a revivalist record, and one still missing the modern flare that could make it more unique, more cohesive, and less indebted to the music it mimics. The Bees continue to come off as a well-oiled cover band playing original tunes, their formula too humdrum to merit swapping out the source material for these songs, and they haven’t the youth or the ambition to permit forgiveness this time around. Certainly Every Step sounds great and incorporates bizarre instruments into challenging arrangements, but it seems to make a pigeonhole of the time capsule in which the Bees helplessly jam.

In peak moments the band can still dazzle, flexing the hermetic farmhand aesthetic that it seems most interested in pursuing throughout this record. Opener “I Really Need Love” is a joyous George Harrison workout, sitars to boot, with a tantalizing start-stop refrain reminiscent of the Band’s “When You Awake.” “I don’t want to put my feelings / In another song all because of you,” sing bandleaders Aaron Fletcher and Paul Butler in loose harmony on the chorus, really quite devastatingly, before the whole thing rollicks into the two-chord acoustic revelry of its coda. The delusional, empty bliss of Syd Barrett being another touchpoint here—sometimes to an advantage, sometimes not—several songs feature bleary and lethargic flourishes: the mumbled vocals on “No More Excuses,” which fall in and out of rhythm amidst mocking horns, staccato strings and accordion; the nimble paranoia of “Island Love Letter,” which frames a lazy, wordless chorus with finger-picked and waltz-like verses; and jazzy “Skill of the Man,” where the meaningless, improvised energy of a Ken Kesey acid powwow is exacted through “dah-dah-dah” instrumental breaks. Even the effortless samba of final track “Gaia” is enjoyable, if poorly placed; its bustle could have easily reinvigorated this record somewhere between “Winter Rose” and “Island Love Letter,” an otherwise sluggish twenty minutes placed at its core.

Meanwhile, the most trite songs here quickly reduce to their beginnings. “Silver Line,” a thumping folk ballad, is stuck in the mold of Moby Grape. “Winter Rose” actually manages to evoke the closest thing to what could be called the Bee’s signature sound—a bass-driven reggae foundation, crunching guitars and riffing horns, that feeling of familiarity filtered through a stoned haze—but it’s frankly less interesting than what this band has done before, and far too long. And on “Change Can Happen,” the Bees stumble into this record’s most peculiar track, which is saying something, especially after hearing the abstract sound collage of “Pressure Makes Me Lazy.” In its verses, “Change” devotes three of every four measures to a pleasant melody that gleefully borrows from “As Tears Go By,” then collapses for four beats atop a bratty, drunken riff serving little purpose but to paralyze the song’s momentum. Somehow, the song’s instrumentation brings to mind Kanye West’s “Hey Mama,” and its chorus forces some minor chords just to further complicate the mix. In strict terms, it’s a mess, and particularly frustrating because it’s impossible to tell whether this band is trying too hard or not at all.

What the Bees inarguably need to try is rediscovering their own roots, sidelining the obsessive crate-digging that has informed the last half of their output, and making an album for themselves, not for their heroes. As a band ages, it seems natural for its members to define more specifically their own tastes; those tastes, however, need not get in the way of the natural character and wit that existed even in the absence of stimulus. The Bees are forever growing technically proficient and more comfortable as a band—that, if anything, is the most positive takeaway from Every Step— but they’re losing the edge as songwriters that their youth and unfussiness once finessed. This album, despite its merits, doesn’t do much but position the band as a bunch of revivalists in serious need of reviving.