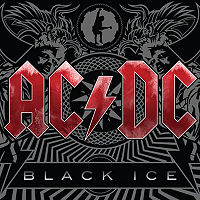 Black Ice, easily AC/DC’s finest studio album in nigh three decades, finds Brian Johnson and the Young brothers impossibly reinvigorated, and as difficult to pin down as ever. The addition of über-rock producer Brendan O’Brien has introduced significant layers of depth to their ever-changing sound, now expanded to include O’Brien staples such as a synthesized string section, backwards guitar loops, even a gospel choir. The result is a late-career psychedelic gem on par with the finest of Dark Side (1973)-era Pink Floyd. Psych: Black Ice is the same album AC/DC has been making with mixed results for 34 years, except awesome this time. Predictably, the release has been lauded generously in the establishment rock press and almost completely ignored by the indies.

The phenomenon of AC/DC highlights a series of double-binds for the indie critical community. Purporting to speak in the name of the people against the Clear Channel consensus, indie critics must repudiate much of the people’s music in order to offer an alternative canon. This cultural elitism bristles against indie’s supposed politics of inclusion: we welcome freaks, geeks, harmonium twees, punks, knob twiddlers, and experimentalists of all sorts; just no Nickelback jocks. As the purview of indie criticism expands to include Britney pop, hip hop, metal, and even occasionally new country—fueled by the chest-thumping machismo of “my taste is so unassailable, I can even like that“—indie must yet stand in opposition to something, a set of pedestrian tastes against which ours are elite. And if it’s not what we like that’s different, it’s the way we like it, ironically, or as an exception that proves the rule.

AC/DC’s big, dumb rock thus provokes several uncomfortable, unsatisfying responses. Some hate the band outright, while some claim to enjoy only the “real” AC/DC of the Bon Scott era. Others focus on formal aspects (guitar sound, production), turning a blind eye to the band’s regrettable politics. Others use irony as a mode of recovery, an approach that has fallen out of favor since its hey-day in the mid-‘90s (remember self-aware jump-kicks?). Whatever their mode of appreciation, it is impossible for indie kids to relate as directly to AC/DC as to, say, David Bowie or Sonic Youth. Since AC/DC came up anti-hippy and anti-punk, the antipathy is natural (and, presumably, mutual). Their pervasive sexism, their anti-intellectual, anti-art stance, and their refusal to stray from the power-chord+lead rock template make them outliers in indie circles, a situation clearly more troubling for us than for them. The band has sold out arenas twice over for their upcoming world tour; Back In Black (1980) is the second highest selling record of all time (behind Thriller [1982]) and Black Ice, despite being AC/DC’s twentieth (!) record, will still outsell 400 Animal Collectives. This kind of popularity alone—not to mention the band’s surprising late-career vigor and renewed sense of cultural relevance—points to a phenomenon worthy of more capable engagement than our paradigm can muster.

And really, who can blame those who feel disconnected from a misogynist anachronism, a lazy, boorish gaggle of ingrates who capitalized on the publicity of their singer’s death and have rested on their laurels ever since? I certainly can’t, nor can I fully dismiss a record this good on those grounds. AC/DC’s appeal, for better or for worse, is to our basest instincts. This handful of fifty (and in the case of Brian Johnson, 60) something men are still quite capable of mining that inner twelve year old who thinks that any music without heavy power-chords and screeching vocal chords must automatically suck. It’s this same school of thought that requires every chorus to consist entirely of the song title group-shouted at maximum volume, and that a lyric such as “rocking all the way” can only be logically followed by “coming out to play.” “Big Jack” has to, needs to, rhyme with “full sack.”

The brothers Young have mined this territory for thirty-four years. Belle & Sebastian and their thoughtful compatriots have their place, but there’s yet something immensely satisfying about shouting “SPOILING FOR A FIGHT!” while air drumming with your “Grr” face on. None of which is to say that every AC/DC album is created equal. Neither AC/DC themselves, nor any rock band living or dead, is capable of re-attaining the majesty that is Back in Black. And while their existence is notable for some of the most enduring AOR classics/gentleman’s club anthems of the late 20th century, they had a seriously rough go of it through most of the ’80s. Interchangeably lame records like Fly on the Wall (1985) and Blow Up Your Video (1988) showcased recurring problems like a revolving door rhythm section, frequently shitty production, and the steady deterioration of Brian Johnson’s voice, which the band was often forced to hide behind layers of reverb.

Fortunately the ’90s and early aughts were considerably kinder, featuring more than serviceable records in Ballbreaker (1995) and Stiff Upper Lip (2000) (pronounced “Stiff, up her lip,” shudder), and one really good one in The Razor’s Edge (1990). The latter of these actually contains permanent setlist fodder like the hammer-on madness of “Thunderstruck” and “Money Talks” (sing it! “C’mon, c’mon, love me for the money!”). Black Ice is better than any of those, and, surprisingly, ubiquitous rock producer Brendan O’Brien is one big reason for that. Prior to his notoriety for damn near murdering all of Springsteen’s recent records with ill-advised fake string arrangements, O’Brien admirably produced a handful of grunge-era “classics” (ie Pearl Jam’s second record, Rage Against the Machine’s first), and his love of a Big Rock Sound works to AC/DC’s benefit. Phil Rudd’s metronomic swing is placed extremely high in the mix, and hasn’t had this much oomph in ages. And most importantly, the Young Brothers ring out crystal clear, with deft separation featuring one guitar in each speaker.

O’Brien’s chief achievement is to resurrect the Young brothers’ guitar sound, and theirs is to wrap it around a phalanx of best-in-breed riffs. With a palate this minimal, everything counts, so keeping the treble bright and the articulation sharp is key. It’s here in the song/riff-writing (for AC/DC, what’s the difference?) that we may have the key to the eight-year gap between albums. Perhaps Brian Johnson put it best in an interview with RTBF: “Simple things are hard to write.” The Young brothers—refusing to work with keys, effects, or anything that might complicate or vary their sound—set themselves a mighty challenge: produce a set of guitar parts simultaneously compelling and dead-simple. Refusing to seek one inch of new ground, the riffs yet demonstrate some sort of undeniable reason d’etre, the kind of ineffable greatness that separates the vocal melodies of the Barry/Greenwich, Lennon, or Wilson from all their imitators. It’s this mystery that drove Rivers Cuomo to fill notebooks analyzing Nirvana songs in a maniacal attempt to wrest from them their secrets. We have no privileged access to the enigma; we can only extol O’Brien’s feat in helping the Young brothers find it again.

Black Ice leads with its strongest track, the indomitable “Rock N’ Roll Train.” With a riff that stands closer to their very best work than anyone could’ve hoped, “Rock N’ Roll Train” announces AC/DC’s deadly serious intention to sound as hungry and urgent on this record as they did in the ‘70s. The momentum continues through the stop-start riffage of “Skies on Fire” and “Big Jack” to the surprisingly successful FM pop of “Anything Goes.” The almost power-poppy melodicism of Black Ice‘s answer to “Money Talks” is immediately contrasted by “War Machine”‘s throaty eighth note drive. Thus ends the record’s impossibly good first third, which transcends the usual late-career faint praise of “actually not as bad as we thought” to stand as perhaps the strongest AC/DC side in twenty-eight years.

Things in the middle third get worse, but no track is outright skippable. There are plenty of fist-pumping moments in “Smash N’ Grab” and “Spoilin’ For a Fight,” and “Stormy May Day” even gives us a little slide guitar, Young’s idea of throwing his audience a curveball. The album recovers toward the end, returning to the bluesy sound of their recent work. Though they no longer attack women with the ferocity of songs like “Givin’ The Dog a Bone,” the band still has its cringe moments. On “Rocking All the Way” Johnson implores the listener to “push it, lug it, thrust her over it.” The persistence of this obnoxious tendency—something they share with some of the best hip-hop—is our biggest beef with Black Ice. Like all AC/DC records, this is a troubling one to love.

Our love, however, persists. Let theoretical minds more potent than ours unpack these difficulties; we are content to wonder at the bone-smashing vitality of a band pronounced dead twenty years ago. Our minds may be mixed, but our hearts—like theirs—are young, and we have yet to give up on the sublimity of two guitars and a rock and roll dream.