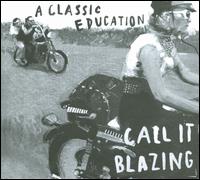 Hailing from Italy and headed by Canadian expatriate Jonathan Clancy, A Classic Education’s styles are crafted not of the cultural pressures and philosophical expectations inherited from their present community, but of sources available to a band based in a non-English-speaking, Mediterranean country disconnected from their heretofore-defined identity. Like the Internet. Derived in equal measure from standard-bearers of the genre to which they ascribe—Pavement, Pixies, Galaxie 500—and bands popular enough to be, for lack of a better term, universal—the Shins, Real Estate, Deerhunter, Chad VanGaalen—their choices reflect an overtly general idea of what all similar others look to for inspiration when regionalism doesn’t hold much sway.

A Classic Education is so glib and overt, demonstrating such exacting reproduction, such stark overlap of artists, such boundary-less abandon only a band learning off online would try, they achieve a freshness their peers often lack. It’s also glaringly obvious whom they’re pulling lines from. Take the aptly named, “Can You Feel The Backwash”; admittedly, the band’s debut, Call It Blazing, is fairly categorized as backwash, as a cadre of styles A Classic Education had no real part in developing, tethered to times they never experienced. Smacking heavily of early ‘90s indie rock touchstones, the album relies on the reasons why people still consider such touchstones relevant so many years later.

Back to “Backwash”: Clancy crows the title line with equal parts sardonic aplomb and showoff-y dexterity as he eases down the backside with a drawling “backwash” which feels like a surfer completing a serious run on a large wave. It fits the instrumentation perfectly, which is a slick combination of Surfer Blood earnestness and tangly Ted Leo agility that brushes up against nostalgia—and not of the patronizing sort, but of the warm, comfortable type. That is, until the chorus dissolves and the rhythm guitar and percussion switch seamlessly from a binary of verse-chorus-verse to a post-chorus suite, perhaps striking a quite different nerve: jealousy.

Really, it’s hard not to fall in love with most of these engagingly fun, tastefully lean (most tracks are under three minutes) songs. “Place A Bet On You” features the coolly lit somberness of the Shins’ Oh, Inverted World (2001), its tones equal parts chic laziness and sad resignation, that is, before it staggers to attention at its chorus. “Forever Boy,” as I’ve mentioned, is all the potential poppiness of Women’s oeuvre rolled into one choppy, surprisingly catchy track. On “Night Owl,” the droopy guitar work that opens is made to stand erect as a navel-gazing, arena-ready riff, but then soon stands humbly by as marching drum lines show it the door.

When, on “Billy’s Gang Dream,” as guitars soften and expand at an alarming pace, the barebones track grows until it spills over into a comfortably paced though decidedly different second act, one gets a taste of what exactly A Classic Education has to offer—not just what impressions they can pull off. See also: “Baby, It’s Fine”—the gliding motion of Clancy’s vocals, supporting keyboard accents pulled taut like the string on a kite—neither track sounds much like anyone else. Which is the making of an instant classic, right? But what they’ve done is only pretty good; it’s clear what they can potentially do is far more amazing. And so Call It Blazing succeeds, not as an original statement from a young band, but as a young statement from a band with an old soul. It’s a competent sum of their many, many parts, but until the band can call somewhere home, it won’t be much more than that.